Creating the Post-Apocalyptic World of Stephen King’s ‘The Stand’ 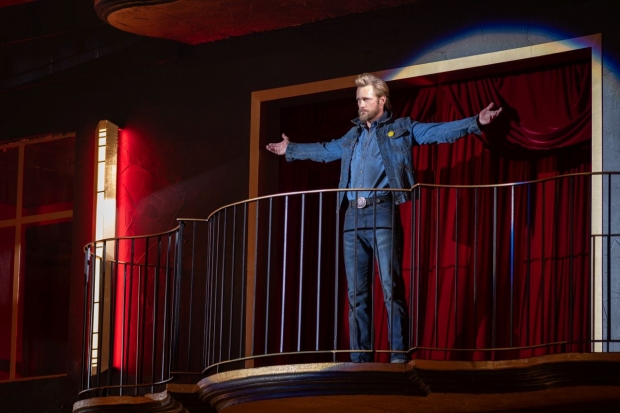 In Paramount+’s The Stand, based on Stephen King’s best-selling novel of the same name, a post-apocalyptic world decimated by plague becomes embroiled in an elemental struggle between good and evil. Mankind’s fate rests on the frail shoulders of the 108-year-old Mother Abagail and a handful of survivors. Their worst nightmares are embodied in a man with a lethal smile and unspeakable powers: Randall Flagg, the Dark Man.

Braver (Hostiles, John Wick, Birdman) was also the production’s 2nd Unit Director and Overall VFX Supervisor, involved at every stage, from pre-production to final delivery. He worked closely with ILM VFX Supervisor Laurent Hugueniot; all told, Braver was responsible for finaling 3,000 VFX shots, of which 2,800 were delivered.

Check out this detailed VFX breakdown reel from ArtofVFX showing some of the great work done under Braver’s watch:

By the time show producers asked Braver to direct all the 2nd unit shooting, he’d been the show’s Overall VFX Supervisor for the first six months of prep. “Naturally, many of the things 2nd unit captures are VFX heavy -- so to me, it sort of falls under that quote from the Dalai Lama, ‘Know the rules well, so you can break them effectively,’” he says. “My relationship with the different directors ran pretty deep, as we understood how closely connected VFX and 2nd unit can be.  Since I was already working closely with showrunner Ben Cavell, it created a very collaborative and streamlined process.”

Visual effects on the series were vast, running the gamut from small to big. “Making a believable world that is empty required lots of paint outs of elements like cars, planes and such, so that's the ‘simple’ stuff,” Braver explains. “Then you have Flagg’s true form, which was entirely CG; large environments like the gully, missile silo, and New Vegas; very heavy simulation work in Mother Abigail’s house explosion; and Flagg’s powers, which were not so simple.”

“ILM took on all the tube necks, animals, creatures, all of New Vegas and their related sequences, like our Hero’s drive into Vegas, Nadine’s Fall, Hand of God, and the nuclear explosion,” he continues. “They did some great work in tandem with Phosphene on Flagg’s Powers, and Mother Abigail’s look.”

“Our work also included the continued development of ILM's bespoke feather system,” he adds. “ILM's Art Department / concept team assisted Jake and Vincenzo with the design of Randal Flagg's true form; the same can be said of the creation of the Inferno Casino in New Vegas, concepting the exterior and interior, collaborating with Jake and Aaron from the early days, and refining the design all the way until we saw it in camera.”

The production made use of two concept artists working in the Art Department, plus a team under Jason Horley’s supervision at ILM. “Both The Third Floor and Proof contributed previs,” Braver notes. “Third Floor prevised everything in New Vegas -- Nadine’s Fall and Hand of God. Proof prevised the Hoover Dam and well sequences, along with some stuff that didn't end up in the show.”

He also shares, “We were lucky enough to have Laurent around while the Art Department was working, so he got the benefit of hearing all these early conversations. The same goes with previs, I was constantly showing the latest iterations to ILM and discussing methodologies with him.”

For Braver, the show’s biggest challenge was keeping an honest and consistent tone to the VFX. “The series starts very small in Maine with Harold and Frannie, growing to this massive epic clash between Flagg and larger forces,” he says. “We started planning the Hand of God finale sequence even before the show was fully greenlit. In fact, I think it was some of the first concept art that ILM’s Art Department started working on. That sequence was so well prepped, and director Vincenzo Natali was such a great partner to work with, that it really went very well.”

He was especially impressed by ILM’s work on New Vegas, stating, “It’s amazing. We see Vegas pretty late into the show and it really was a joy to work with them to figure out how to establish the world in the most effective way.”

“The Hand of God sequence was also complex,” he continues. “From the start of prep, we always knew there would be a sequence that mirrors the end of the book, with forces intervening with Flagg’s plan to nuke Boulder. So, when the production designer Aaron Haye and I were talking about that set, we were always thinking of the endgame - its destruction.”

Designing it “backwards” meant prevising the entire sequence. “Aside from the set extensions, there was also the cloud and lightning, which we spent a fair amount of time developing,” Braver says. “It very quickly became clear in prep that all of the destruction, blood, debris, and scorching were going to be CG.”

“I second this,” Hugueniot adds. “The Hand of God sequence is our most complex work. It took much careful planning to create what appears to be complete chaos. For instance, it was clear that the on-set lighting from yet to be created lightning bolts was a crucial component, and Jake made sure the sequence was shot with this lighting in camera. It was for us to then add lightning bolts, hitting characters, and damaging the set, as well as dust, smoke, flames, to generally amplify the mayhem. As we created half of the extras digitally, it was only natural that we should kill a few to enhance the sequence. We also created the death of a couple of hero characters, full frame, which involved highly detailed digital versions, including internal organs and bones, that we ‘exploded’ with dynamic simulation.”

Some virtual camera was used for previs by The Third Floor; for some on-set shooting of the Inferno interior, the production used a real-time iPad setup from ILM to view the 2/3rds of the interior set that was CG.  “To provide some context, we often do virtual work as part of the filmmaking process to help with shot design, camera placement, and visualization of digital assets,” Hugueniot explains. “The experience and design process are greatly enhanced by the fact this is all real-time.”

Luckily for Braver, main unit photography wrapped in Vancouver three days before everything shutdown due to the pandemic. “I was actually in Las Vegas prepping to direct our second Las Vegas unit -- the first was in December 2019,” he reveals. “We shut down that unit without shooting and went right into a fully remote post. We would ultimately capture the remaining Las Vegas photography in August 2020, under very strict safety precautions. I’m told we were actually the first scripted project filming again at Viacom. Meanwhile, all our vendors were moving remote at the same time we were. At first, we really didn’t know what to expect, and I don't think the vendors did either. But no one missed a beat. I remember a particular call with Stefan Drury at ILM on a Friday where he said this was their last day in the office, and that he had to get off the phone to hand out keyboards to artists; and by Monday, we were doing a review with everyone at home.”

The almost eerie irony of entering the unprecedented COVID-19 lockdown to work on a series about a post-apocalyptic world ravaged by plague was not lost on Hugueniot. “I will never forget that at the time we entered lockdown, no one knew how the COVID-19 pandemic would unfold, and we were spending our days dealing with imagery depicting an extremely virulent pandemic,” he says. “Yet, we all managed, recreating a version of work at home. We were one of the lucky shows that had the majority of its photography completed, while many were postponed. In fact, because of the pandemic, we were considering more CG work, as a plan B, in case the remaining shoot couldn’t happen.”