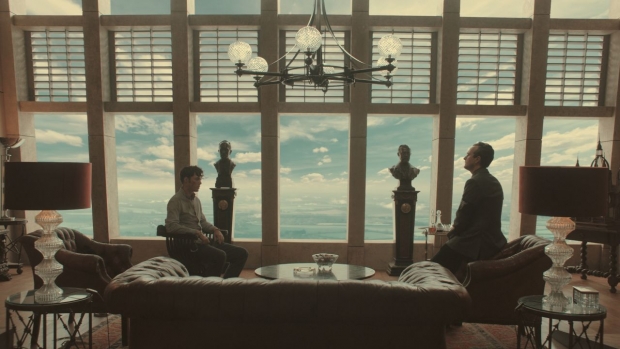 In the action-thriller Pennyworth’s 10-part Season 2, two significant changes in the production are worth noting. First, everything from shooting to post-production was move to the UK. Second, visual effects were produced by multiple vendors, rather than just one.

The episodic crime drama, based on DC Comics characters and produced by Warner Horizon for Starzplay and Epix, is set a year after the explosive events of Season 1. 1960's England is now embroiled in a devastating civil war. Alfred Pennyworth (played by Jack Bannon), who previously started working for Bruce Wayne's father (played by Ben Aldridge), is now fighting against a neo-fascist Raven Union threatening to control the entire country. Created by Gotham writers Bruno Heller and Danny Cannon, the series is directed by Rob Bailey, Danny Cannon, Jon East, and Catherine Morshead.

“Pennyworth is a fantastic looking show and quite unique in my opinion,” states VFX supervisor Rob Delicata (The Great).  “First and foremost, it’s a character driven drama series set in an alternate London 60’s world.  The visual effects need to complement not only the story and character development, but the strong visual narrative which has been set by our DOP Mark Patten, production designer Mark Scruton, costume designer Liza Bracey, and hair and make-up designer Jane Walker.  In terms of visual effects development from Season 1 to Season 2, you can see the progression is quite dramatic.  The UK is engulfed in a civil war, especially London, where our story is centered.  We descend into a darker, more menacing, and brutal territory. Society is falling apart, and a dark dystopian future awaits. With this darker story arc, the scale and intensity of the visual effects have grown from Season 1.” Over 1,300 visual effects shots were delivered by CoSA VFX, IMG VFX, MPC, Freefolk, and Rumble VFX for the latest season, all helping audiences explore the life of British SAS operative Alfred Pennyworth (Jack Bannon) before he became the Wayne family’s butler. “I feel that Season 2 is a bridge between Season 1 and Season 3,” notes Delicata.  “We are starting to connect the dots to the Batman and DC world setting with our characters and scenes for what is to come in Season 3.  Pennyworth is becoming more heightened, darker, stranger, and funnier than Season 1; that totally mirrors the darker DC universe and Batman, in particular.”  The speed of production meant there was little in the way of previs.  “We used postvis for a number of the bigger shots that connected our live-action photography to our CG world,” he continues. “For example, there’s a great shot where we travel up the tower of Raven HQ through a window to find Colonel John Salt [Edward Hogg] sitting; that worked well from the initial planning through to shoot, postvis for signoff, and then into the shot.” “The pub explosion scene was shot with multiple cameras on the back lot and in fact. the pub is already destroyed for a bombed-out London under siege look,” Delicata shares. “CoSA VFX was looking after this shot and so we had to rebuild the pub for the few seconds it’s on screen before we then explode it.  We had detailed on-set camera data and a LiDAR scan of the entire set, which really helped us in terms of setting up this shot.  We talked in advance with the special effects team from Atrem, led by SFX supervisor Toby Stewart and Floor supervisor Bernard Newton, to discuss and plan what we wanted.  We wanted a real explosion and fire ball, not too big, with physical debris coming out from the pub.  We would then augment the practical explosion with our visual effects simulations, rebuild the pub and explode the building, and blowout the windows and doors.  For added realism, stunt actors were placed by the pub to react to the practical explosion.  We also doubled Mrs. Pennyworth [Dorothy Atkinson] for the shot as she is very close to the explosion and blown off her feet by the blast.” “The Stormcloud Gas Experiment in our earlier episodes became a total visual effects solution due to a number of reasons,” he continues. “We were shooting outside on location so we had no control of the weather and environment. The gas cloud itself needed to be designed from activation on the tower through to interaction with the prisoners. Visual effects needed to design the speed, consistency, and color look and feel of the cloud; it needed to grow, with a subtle and devastating impact which would never have been achieved from a practical solution.  Portable greenscreens were always carried for any location and internal stage work to help us out as and when needed.”

The London seen in the show is not an exact period replication, but has been augmented, replaced, or built specifically for the world of Pennyworth.  “To begin with, we were either changing or adapting our aerial and shot location footage,” Delicata reveals.  “As the story moved on and we moved more onto our backlot environment due to COVID-19, we were changing and augmenting those sets as much as we could.  London under siege required extensive plate augmentation; either rooftops being added or destroyed.  Streets were extended with people and street cars, while street furniture was added to give depth to our city.  Buildings were distressed or destroyed as well.  We were adding digital doubles where needed as well as 2D elements of extras that we shot.   We were constantly creating a library of assets that we could use anytime needed.  We had to shoot all variations of our extras for Raven soldiers and clerical works, League soldiers, Soho and London nightlife crowd, and street crowds.  We also took photos reference of those extras to populate our scenes with massive digital doubles.”

One significant environment build was the interior of the wrestling arena.  “We shot the practical wrestling stage with the announcer and 20 odd crowd on a stage at Elstree to give us our hero shot,” Delicata says.  “We then went into our greenscreen effects stage and shot rows of extras in different positions to give us four sides of close-up crowd around the wrestling ring.  We shot them all booing, cheering, and sitting in their seats waiting for the action.  We also shot photo reference of our extras to use in populating the rest of the arena with digital doubles.  We then built the arena and lighting gantry with spotlights, posters and walls added to the background.  Atmosphere and mist added to bed everything in.  Our crowd of 2D elements was then used for the foreground, and our massive digital doubles were used for the midground and background.” Delicata encountered a variety of challenges in the Season 2 UK move and VFX production expansion. Time was limited by a tough schedule, increased shot count, and pandemic lockdown. “Being shut down due to COVID-19, coming back up five months later and having to adjust to a new way of working and new set of production challenges was difficult,” reflects Delicata. “When you add all those scenarios together, there was a lot for me, the team and the vendors to get through.  We can all be proud of what we achieved.”