Cinesite Toots its Own Horn with their Animated Short ‘Beans’

Let’s dig into Cinesite’s new animated short, Beans.  The studio has a great reputation for high-end visual effects as well as character animation. This new sci-fi themed short, with over 5 million YouTube hits, provides the studio a high-profile platform from which to show off their creature skills and general creative capabilities, a lesson many short film makers (well, long short film makers who should be making far shorter films) could stand to learn.  Everything needed to make a great little short film, all wrapped up in 42 seconds.

Cinesite’s animation director Eamonn Butler, the film’s producer, answered a few questions for us about the production. All images courtesy of Cinesite. Dan Sarto: Why produce such a short? Why now?

Eamonn Butler: Initially, we wanted to develop the creature content in our show reel.  The more we thought about it, the more sense it made to push ourselves creatively, to create a standalone project.

We're used to working with film directors, helping them to create their vision. With Beans, we wanted the creative vision to be ours.  We were looking for a project to work on while Alvise Avati, the film’s writer and director, was working at Cinesite.  He pitched the idea to us and we ran with it.  I joined Cinesite in 2012, almost exactly a year ago, with the express intention of developing the company’s animation capabilities.  I set myself a goal to update the reel before my one year anniversary.

DS: What is the genesis of the idea? Who is the comedian on staff who is behind this?

EB: Alvise Avati is a talented animator, who was working with us on Edge of Tomorrow while we were looking for concepts for an in-house project.  When he approached us, he had storyboards and animatics and had already begun researching looks for the environment and creature.  Beans is self-contained, short and funny.  It could also be made in a relatively short time frame, so it ticked every box for us.  With the skills we have here, I knew we could add great production value and have a lot of fun making it. DS: How long did it take to make? Anything unique production challenges you can share?

EB: We began work in May and finished in October 2013, but it wasn't worked on continuously during this time.  It was fitted in around other work we had in-house. We watched a lot of NASA photographic footage from Moon missions and the Moon landing.  We researched camera types and lenses used and matched the looks as closely as possible.

The dust on the planet surface is kicked up by the monster and the astronauts' impacts on the ground.  Initially, our highly realistic dust simulations created using Houdini looked like CG particle animation, so we introduced a layered approach. Some were simple, with particles reacting with each other, some were fluid based. Some were cloudy and others clumped together. The team created several dust passes and tweaked the gravity on each dust kick to make it look better. 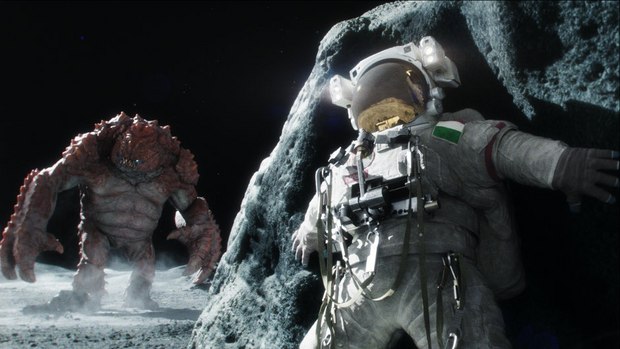 So overall, the biggest challenge we faced was figuring out the idiosyncrasies of how movement is affected by low gravity and making sure the environment was a convincing lunar setting.

Check out this in-depth behind-the-scenes look at the film’s production.  An impressive way to trumpet their creature animation capabilities, wouldn’t you say?

The Massive Creative Fellowship Behind ‘The Lord of the Rings: The Rings of Power’
‘The Dragon Prince’ Director Villads Spangsberg Talks Toonlines and Tough Challenges
Laurence Fishburne and Steve Loter Talk ‘Marvel’s Moon Girl and Devil Dinosaur’
Taking an Old-School VFX Approach in ‘All Quiet on the Western Front’
‘Natural Habitat Shorts’: Like ‘Ranger Rick,’ But for Adults
Framestore Sets Sail on ‘1899’ with New Virtual Production Tools
VFX is the ‘Thing’ for Tom Turnbull on Tim Burton’s ‘Wednesday’
We Need to Chat
END_OF_DOCUMENT_TOKEN_TO_BE_REPLACED