The sequel finds Katniss back in the hunt for survival with more grounded VFX.

All images courtesy of Lionsgate.

The stakes are raised all the way around in Hunger Games: Catching Fire. Jennifer Lawrence's Katniss and Josh Hutcherson's Peeta are back in the games, thanks to the conniving Quarter Quell that wants her dead. And this time Francis Lawrence (I am Legend) stepped in as director with a more focused approach, carrying the story more from Katniss' perspective through camera work and framing.

"One of the briefs we had was people didn't feel they saw enough of the world in the first movie," explains Janek Sirrs, the production VFX supervisor. "And Francis wanted to open the world up more so we could see the districts and what goes on in various places. The scale is bigger. For example, in District 11, where Katniss is from, you see more about how they mined things, hinting more of the technology that the capital has sent out to the various districts, whether they be harvest machines or mining machines. You've got this juxtaposition of a high-tech capital and this rather feudal village system. They may be indentured servitude but they're not digging coal with their hands."

DNeg contributed a little more than 400 shots, creating the Avenue of the Tributes, city environments and hovercraft, the jungle environment, the cornucopia, the jabberjays, the tidal wave, the deadly fog and the Arena’s final destruction.

"For the Avenue of the Tributes sequence, almost the entire environment was created digitally," explains De Wet. "The only things that we actually shot for real (in the parking lot of the Atlanta Speedway) were the hero tributes in their chariots with horses in front of 300 feet of greenscreen, and some crowd elements. Even the background tributes/horses/chariots were CG. The Avenue's road surface, the bleachers, the buildings, the Presidential Enclosure and the Circle, the city layout, the skies: it all had to be designed in concept, modeled, textured, lit and rendered.

"All the waterfalls and the fountains and pools had to be simulated. And although we filmed plenty of crowd elements clapping and cheering from all possible angles and distances for later tiling, there was still a huge demand for fully animated digital extras. We also designed the fire effect on the costumes, when Peeta and Katniss emit flames and embers to show off to President Snow [Donald Sutherland]."

Meanwhile, the jungle environment contained thousands of animated digital trees, water, vegetation and digi doubles. They shot the scene on a set built into a water park south of Atlanta, GA. The cornucopia ended up being replaced with a fully digital version. What the Arena ultimately had to be in the final film was an island in the middle of a tropical lagoon, connected by 12 spokes to a beach that surrounded the lagoon.

"Throughout the Arena scenes we were required to create a wide range of digital trees," adds De Wet, "including cocoanut palm, date palm, monkeypod tree (Albizia saman), Ficus benjamina, Katsura and a whole host of other plants, including Pothus and Mostera deliciosa, which are creeping plants which cover trunks of other trees. All these plants had to be modeled and then we had to simulate them moving in the breeze, which brought the whole thing to life. As well as vegetation, we were also required to produce animal life, namely the Jabberjays, a scampering lizard and some swarms of flying insects to give the jungle an uncomfortable, tropical feel." There were two particularly daunting challenges: the water effects such as the spinning island overhead shot where we see all the white water and spray being churned up; and the Arena environment, which from the outset had to be 100% CG: all those trees, blowing in the wind, the lagoon surface with the lapping waves: and it all had to be totally believable, totally photorealistic.

"But when we lit and composited the CG water it quickly became apparent that the perceived scale of the spinning island and the water was not large enough: it felt like a miniature. This was because of many things: the particle size of the water spray felt too large, the water spray was travelling too fast and too far, and the wavelets in the white-water churn were too large. This created the feeling that the scale of the whole system was too small. But we had a problem: we were using all the latest and greatest simulation software (Houdini 12.5), and we were working at the upper limit of our rendering capabilities in terms of voxel resolution. It was clear that what we had to do was to split up the simulations into smaller chunks of volume so that we could decrease particle size, add more particles and increase simulation resolution. As well as this, we added a huge amount of separate local sims: more localized spray, more waves, more interaction with the spinning island pushing the water round."

Weta was in charge of designing and animating the baboons (a combination of the fierce drill with the colorful markings of the mandrill). But they were keyframed rather than the performance-captured method of the Apes reboot.

"Part of the reason we keyframed them is that they have a non-anthropomorphic morphology so that they're quadrupedal," remarks Williams. "They can walk around on their hind legs for short amounts of time. They also have different hair. It's as long as some of the hair that we did on the orangutans on Apes, except a lot fluffier and silkier. So it was a new spin on monkeys for us.

"As far as the challenges, we built it a lot like the apes. We used our tissue system that represents muscle and tissue and fasca to do all the movement and dynamics of the skin. And then on top of that we used our fur system for the fur already being moved around by the dynamics of the creature, and then simulated the fur with its own dynamics also."

Among Method's 155 shots (using Maya, Houdini, Nuke, Photoshop ) were the fiery dresses and feathered wings, robotic cameras CG train and some other environments. Victor's Village environment was a full 3D build. Production had built two half houses on set which needed topped up with CG extensions. A further eight houses were created digitally, and extended ground, with snow cover was created. The shots were shot with partial bluescreen, and varying lighting conditions. Falling snow FX was added to complete the scene. 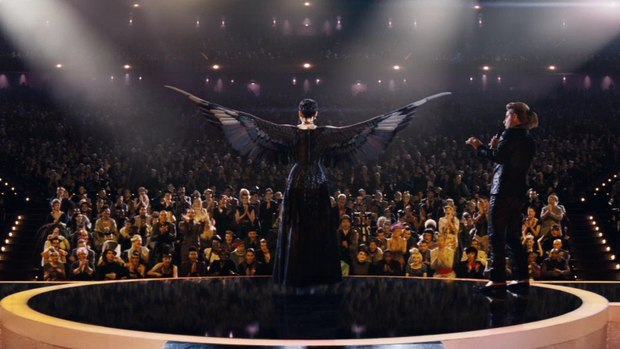 One scene at night with the lead characters interviewed on TV required fully CG "robotic cameras." these were taken through concept, modeling and surfacing, with some characteristic animation to lighting.

Finally, there is a dramatic moment when Katniss and Peeta travel through a tunnel to District 11. Method created a full CG environment looking out the back of the observation car of the train, from a lush green landscape through an ominous tunnel where graffiti of the mockingbird logo is lit by flashes, before exiting again to reveal an enormous security wall with fences, soldiers and trucks, all realized in CG.

In conclusion, Sirrs underscores that director Lawrence was after a very naturalistic visual style. "It's seeing the world through Katniss' eyes and that's what informed the VFX."

‘Natural Habitat Shorts’: Like ‘Ranger Rick,’ But for Adults
Framestore Sets Sail on ‘1899’ with New Virtual Production Tools
Animated Characters: The Art of Babbitt – Part 1
Bruce Smith and Ralph Farquhar Talk ‘The Proud Family: Louder and Prouder’ Season 2
VFX is the ‘Thing’ for Tom Turnbull on Tim Burton’s ‘Wednesday’
We Need to Chat
Choc Chip Animation Riffs on Pop Culture in ‘The Art of Murder’
F is for Flake: The (Not So) Great Animation Robbery?
END_OF_DOCUMENT_TOKEN_TO_BE_REPLACED