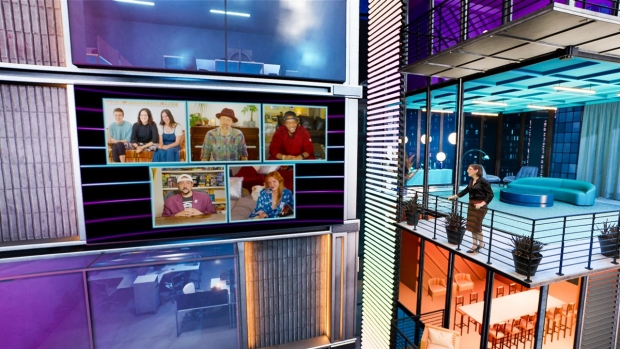 TBS’ Celebrity Show-Off is a unique talent competition series based on the popular Korean show My Little Television. Hosted by Mayim Bialik, the 10-episode remotely produced series transforms the variety show TV format into an innovative virtual production experiment. Each week, celebrities from the worlds of sports, music, comedy, TV, and film face-off to see who can produce the most compelling content from the comfort of their own homes. The longer a celebrity stays in the competition, the more money they raise for their charity, with the last star standing earning an extra donation for their cause.

James Pearse Connelly, the production designer on Celebrity Show-Off, won an Emmy Award for art direction and set decoration on The Kelly Clarkson Show. As the COVID-19 pandemic has taken its toll on physical TV series productions, Connelly and his team at JP Connelly Inc. have been cranking out virtual sets for series requiring quick set turnaround rate, including a number of awards and variety show, such as The Masked Singer, The Voice, and Chrissy’s Court. This has allowed many TV network shows to continue producing, especially multi-camera series, while unions and the industry at large collectively work to settle on new safety guidelines and producers.

According to Connelly, the original idea behind Celebrity Show-Off was to have celebrities build their own physical shows in a studio. “With the gloom of the pandemic, and in an effort to stay relatable and optimistic, we reached for a way to bring a wow factor to audiences stuck at home,” he explains. “The increased need for safety around talent, as well as physical isolation, were some of the deciding factors in our design.  We researched greenscreen productions and how we could embrace that with a multi-camera setup and still keep everyone safe.”

Take a look at his VFX showreel for the series:

“In broadcast TV, downloading assets from a ‘marketplace’ and then tweaking them can cause legal risks for networks, and it feels disconnected from the story as well,” he continues. “There are all sorts of clearance issues associated with downloadable artistry.  This can be very important when it comes to alternative multi-camera television.  In our world of television, the production design is the script.  The set creates the behavior that gets captured on camera.  There is no website for that, especially when working on the most unique scenarios.”

With the world quarantined at home in their apartments, Celebrity Show-Off producers wanted to show characters in the same situation, in a colorful way. “For example,” Connelly notes, “an open balcony to other apartments let us create a fantasy where you can engage closely on video conferences with other people.  The desire was to view inside people’s world’s and get an in-depth look at their at home experiences.”

When approaching the show’s format design, Connelly didn’t really consider his design process to be “virtual production,” but more like “virtual production design,” or what he calls “VPD.” “From a design perspective, we knew the audience would know the world was virtual and we had no shame about going big and exploring the limits of what a virtual world can be in a multi-camera set up.” He continues, “As far as we knew, we needed a keyable environment in the physical space, and a 3D world that could key in and be interactive with the cameras to give our director the same experience he would normally have shooting in a physical world. ‘Virtual Production’ can be a term used for a lot of things.  For us, our focus was using real-time rendering for custom designed worlds along with camera tracking integration to allow the camera to interact with the world. As I look at what ‘Virtual Production’ is defined as now, I can say that it is a perfect combination of VFX and production design.  As a production design studio that has been working in Unreal Engine for set design previs for the last six or so years, we feel really at home and somewhat inspired when designing 3D worlds for virtual productions.”

Connelly goes on to note, “Adding photorealism in the production process to enhance the textures and overall geometry was fun to explore and something we reached out to visual effects houses to provide consultation with.  We provide a collaborative design journey and our designers and VFX artists work together to make it as beautiful and detailed as possible.”

For the production designer, VPD is an exciting, creative frontier, with virtually no boundaries (no pun intended). “I’m having a lot of fun exploring the possibilities and looking at the future of production design,” he shares.  “The studio can now design a physical world and at the same time discuss tangible set extensions to key in to extend the height or depth of a playable space.  As a production design studio, we can previs those added worlds and effects, and partner with a VFX house to implement and add value together.”

Further explaining that VPD possibilities are limitless, Connelly adds that he can also, for example, incorporate animated architecture that feels big and heavy, “but costs a fraction of what a physical element would cost to build. Adding virtual levels, depth and incorporating virtual video surfaces gives television a graduation into feature film technology and quality.”

Summing up this growing area of TV virtual production design, he concludes, “As a production designer, the incorporation of technology and partnership with other technology groups is essential to making big block buster wow factors and making bespoke worlds for broadcast and worldwide audiences.”

You can find out more about Connelly’s virtual production design methodology by visiting the JP Connelly website.

The Massive Creative Fellowship Behind ‘The Lord of the Rings: The Rings of Power’
‘The Dragon Prince’ Director Villads Spangsberg Talks Toonlines and Tough Challenges
Laurence Fishburne and Steve Loter Talk ‘Marvel’s Moon Girl and Devil Dinosaur’
Taking an Old-School VFX Approach in ‘All Quiet on the Western Front’
‘Natural Habitat Shorts’: Like ‘Ranger Rick,’ But for Adults
Framestore Sets Sail on ‘1899’ with New Virtual Production Tools
VFX is the ‘Thing’ for Tom Turnbull on Tim Burton’s ‘Wednesday’
We Need to Chat
END_OF_DOCUMENT_TOKEN_TO_BE_REPLACED