Bridging into VFX Education with ‘Acting: The First Six Lessons’ 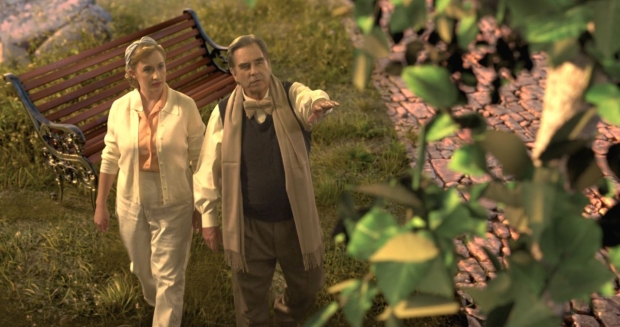 In 1933, when Richard Boleslavsky published “Acting: The First Six Lessons," which centers around a teacher giving sage advice to a student, he created a performance bible – and precursor to “method acting” - still in publication today; that book became an heirloom for the Bridges family, first with famed patriarch Lloyd, who passed it down to sons Beau and Jeff, who in turn returned the favor by passing it on to their own children.  The connection to the work was so strong that Beau and his daughter Emily adapted the series of tutorials into a play, and subsequently, into a family documentary with the latter making her directorial debut in partnership with the multi-faceted Semkhor Productions.

At the center of the project is David Shapiro, who owns Semkhor Productions and, among other varied media and entertainment projects, is a key player in curriculum development for the new, accredited two-year visual effects program at Amarillo College.  “Beau and Emily had given me their play, and I was looking for a next production; when I read it, I thought it would be great,” he shares.

The film, produced with an eye towards teaching VFX students the possibilities of producing high quality, low-cost visual effects, as well as illustrating how actors should be filmed - and integrate - with onset dynamics of visual effects production, has been used numerous times successfully in workshops, and along with additional material from the production, become part of the VFX Unleashed online school and Amarillo College VFX program course materials. Both Beau and Emily will participate in upcoming classes where they’ll use the film as part of their instruction. Using such productions is a key, hands-on component of Shapiro’s ongoing efforts to help shape the VFX program’s instructional paradigm.

Shapiro suggested using interviews with the Bridges family as the narrative spine of the film. The decision was also made not to create the illusion of reality. “We pulled back to see the soundstage, and part of the scene shows the greenscreen filling out because its about acting and visualizing,” he explains. “It’s more of a storybook look, but that’s the beauty of visual effects. What we did with this little project illustrates a method of teaching people not to be bound by small budgets, helping them to learn production, making things work, and creating works in innovative ways that help them build sustainable careers. The storybook look is more animated and better than a lot of the bigger productions that run out of money.  We wanted to bring out the fantastic elements of imagining a landscape, so the visual effects were in service of the story.” In creating an impressionistic mood that’s visually appealing without breaking the bank, Shapiro notes that “Beau and Emily couldn’t believe that it turned out this way. We built this movie to have a rich vein of educational material that works. We’re not talking in theory. Beau and Emily are going to come back and talk about their experience with the students.  We have everything organized to show people that you can reach these production goals inexpensively.  We believe that we can get people up to this type of level as cloud infrastructures improve.”

The prolific Bridges family could establish their own acting school; Lloyd received Primetime Emmy nominations for Seinfeld and The Alcoa Hour; Beau won three Primetime Emmy Awards for Without Warning: The James Brady Story, The Positively True Adventures of the Alleged Texas Cheerleader-Murdering Mom, and The Second Civil War; and Jeff was honored with an Oscar for Crazy Heart.   An enduring element of Acting: The First Six Lessons is that the teachings go beyond the stage. As Emily points out, “It is about acting but also being an engaged person in the world.”  Acting mirrors real life.  “Any investigation of how we actors perform our craft is addressing human behavior because that’s what we do,” Beau adds.  “We try to recreate life.  I love that quote of Boleslavsky in the book, ‘Acting is the life of the human soul receiving its birth through art.’  There was another aspect of the book that I always responded to, which was the teacher-student relationship.  My kids and I look back at those great teachers who were there for us, and they played a huge role in our life experience.  This was a great examination of that relationship.”

While the interview clips mix new and archival footage, the performance sequences retain the period feeling of the 1930s, requiring digital recreations of Central Park and a view of New York City from the Empire State Building.  The revelation leads one to wonder if along with the focus on concentration, memory of emotion, dramatic action, characterization, observation, and rhythm there should be a seventh lesson on visual effects.  “It’s sort of in there because there is chapter on dramatic action,” laughs Emily.  “The student gets frustrated with the talkies, which are not like a play where you start at the beginning and go all the way through to the end.  She comes to her teacher in frustration and says, ‘How do I do this?’ He says, ‘You rely on those same tools.’  The same could be said of the visual effects. During the long walk and talk we couldn’t walk away from the greenscreen.  We would have to orient ourselves. Where is the lake? Once you know what you’re doing it’s all much clearer.”

As a veteran actor, Beau has dealt with visual effects for much of his career. “I’ve been acting for so long that I’ve seen a lot of technical changes in what we do,” he shares. “I was pleased when I saw the results of our greenscreen.  I liked the way that Emily chose to acknowledge that for what it was. We’re not trying to fool people that we’re actually outside. As the scene progresses you forget about it and say, ‘They’re in a park.’  Dante Rinaldi produced our visual effects and he’s a real genius.” Dante Rinaldi is the head of Semkhor’s VFX studio, as well as the lead teacher and director of the VFX Unleashed program, the online school, curriculum development, and teaching partnership between Semkhor and Amarillo College. According to Rinaldi, originally, the plan was to produce a couple matte paintings, but the post-production work eventually expanded into 150 VFX shots with 80 devoted to Central Park and 50 for the Empire State Building. “It involved two full CG set extension sequences [that were each 20 minutes long] as well as some other enhancements. We also had illustrations and caricatures but decided not to use them as they were getting away from the Bridges family.  Basically, it was myself and my roto guy trying to crank out all of these shots so this was a trek!”

Establishing a good working relationship with Beau and Emily during principal photography was important. “As a visual effects supervisor onset, you have to make people comfortable and confident that the result is going to look how they want it to look, and you’re not an interloper saying, ‘Do it this way. Move the camera. Act that way,’” states Rinaldi.  “Beau was so hungry for the knowledge.  We would set something up like tracking markers and he’d ask why we were doing it exactly like that.  When you’re working with someone like that, it’s a dream. He became so enmeshed in the process and loved what everyone was doing.”

During pre-production, concept drawings and storyboards were created by illustration students Eric Wang, Andrew Benson, and Cherry Guo. “We wanted it to look like theatre come to life, so there were blank spots on the stage and people walking around camera,” explains Dante, who took measurements of the soundstage.  “I put together some concepts in Maya and kicked out ambient occlusion renders.  We used these 3D concepts to see where the camera could fit, what needed to be moved away, what could we do to setup the layout and blocking of the action, and what angles looked good?” The visual language was based on a storybook aesthetic rather than photorealism, with oversaturated colors appearing in Central Park.  “The movie is set in the 1930s and they’re walking through Central Park, which was not a pleasant place to be at that time,” Rinaldi says. “It’s the Great Depression, people are out of work, there are tents and mud.  It was not what people would perceive as the idyllic Central Park.  We’re immediately in the fictional world of what people remember that it could have been; that gave me a lot of freedom.”

Research was conducted into what visual elements existed in the 1930s. “I looked up the proper foliage, benches, and lights, and put them together in a storybook way that helped tell the story of where the actors were going, like around a lake,” Rinaldi shares. “Trolleys never went through Central Park, but its fun to have them in the background!”

Rendering of the 10,0000-15,0000 frames was done in Dante’s office using Arnold.  “Rendering is always a balance of time and noise,” he states. “A big part of us getting this done, especially with the Central Park sequence, was doffing out a lot of the background as soon as we narrowed our depth of field down to the actors. That allowed me to get this off the farm faster, even though they’re noisy, do a 2D denoise in post, and then doff it out.”  Considering the number of assets, a procedural and modular methodology was developed to make the environment builds manageable. “Who is going to sit there and put in all of the blades of grass, rocks, benches and bricks?” Rinaldi continues. “I wrote some Python tools to say, ‘Here is my library of assets that are pertinent to the Central Park of that period.’ With a click of a button, I’m randomizing placement, scale, and rotation, and it floods the area with automatic foliage park of what the fulcrum of the camera is seeing. I had to be cognizant of what was going to be 3D in the scene, what was going to move with wind close to the camera, and the further away I got, I went more 2D to keep the render time as short as possible.” Having an aerial view of New York City from the Empire State Building changed the amount of production work. “There are only about five shots where Beau and Emily are looking out over the city [and those were done out of house],” Rinaldi remarks. “The rest of the shots are of them with the backdrop of the observation deck. Compared to the billions of polygons being motivated in the blowing weeds of the Central Park scene, a simple wall was a relief!”

Rinaldi employed a digital character to transition between chapters. “The teacher plays around with this little wooden man, putting him in different acting poses,” he notes. “We were going to use macro photography but realized that it limits the camera.  It was all done in CG.  Each pose represents a chapter. Then it shows the Bridges family on projectors in a makeshift theatre talking about that part of the book and how it means something to them.”  Footage was captured with two RED EPIC cameras. “The whole film was shot on 4K,” Rinaldi says. “I was adamant about filling up the sensor, especially when you’re pulling keys on blowing hair, and you’re going to lose some of that fidelity.  I wanted to have that resolution, dynamic range, and the amazing RED compression that is close to ProRes or even better so I can deal with the noise and get some of those keys out of there.  That was huge.  We never stepped it down to 2K in the camera.  With that extra resolution, we could pull in if necessary. There was a lot of work, but I had fun doing it.”