Assembling an Epic: The VFX of ‘Thor: Ragnarok’ 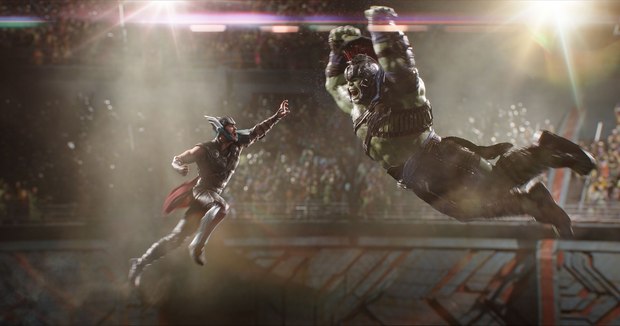 Contending with a filmmaker who loves to improvise and a studio known for making last-minute changes is comparable to a piece of Jazz where inspiration comes from being in the moment. Such was the case for Marvel Studios VFX supervisor Jake Morrison (Ant-Man) as he collaborated with Taika Waititi (Hunt for the Wilderpeople) to produce Thor: Ragnarok, the third instalment of the God of Thunder franchise that to date has grossed more than $1.8 billion at the global box office.

“It’s exciting and never boring!” says Morrison, who oversaw just under 2,700 shots contributed by Framestore, Digital Domain, Double Negative, Industrial Light & Magic, Rising Sun Pictures, Method Studios, Iloura and Luma Pictures. “The way we were able to cope with that on this picture was to have 18 good visual effects vendors so you can move in parallel. You can protect yourself and your vendors but not awarding all of the work to one place and then they get blindsided. You also cast companies that are passionate about the work.” Going back to the original character designs for The Avengers by Marvel Studios head of visual development Ryan Meinerding was the key in upgrading the Hulk. “The Hulk has to talk more than he has done in any of the other films and Mark Ruffalo was going to do the talking, so I started thinking,” Morrison relates. “If you say that Ruffalo has been trapped in The Hulk for two years, maybe a little bit of Ruffalo [as Bruce Banner] has leaked into The Hulk while he’s inside of his head. Now all of a sudden you can have the facial build of the Hulk look more like Ruffalo. Once you do that Ruffalo’s motion and facial capture is much more on model.”

Thor and The Hulk battle each other in a coliseum which required some reverse engineering to make sure that scale, proportions and actions of the six-foot-four and eight-foot-six combatants were correct. In order to achieve this, four-foot-nine stuntman Paul Lowe was brought in along with his six-foot-three colleague Ryan Tarran to choreograph the storyboarded fight. Later Chris Hemsworth learned the scale Thor version portrayed by Lowe and performed all of the movements and actions against blue screen. “Being able to get the proportions correct was the thing that gave the fight a visceral DNA,” Morrison remarks. “ILM ran with that, animated over the top and added a huge amount. The fight stands out for two reasons. The physicality works and there are funny bits.”

Other major CG characters are a stone man from Kronan and a fire demon. “Korg and Surtur suffer from the same complicated technical rigging problems from an animation point of view,” Morrison explains. “The Korg stuff is all improv with Taika [in a mocap suit] running around delivering those lines. We have to start with Taika’s performance, but if he is walking with Chris Hemsworth and takes four steps, because Korg is, like, seven-foot-six and weighs one-and-a-half tons, each of his footsteps have to be much bigger. Then you have to reverse-engineer the animation and choose maybe two of those footsteps that Taika did but then make them longer and slower. Or if Taika pointed to something, you maybe take the moment in the edit where he finishes a point. Then you back time that and start him pointing a little bit earlier so it’s slower just to add more weight to the character,” he says.

“The same thing with muscles,” Morrison continues. “Korg is a bodybuilder, so his elbows wouldn’t flex correctly or he couldn’t put his arms to rest down his sides. Bodybuilders have a small range of motion. We would take what Taika did and stop his arms at certain points. Then from purely technical rigging it’s nuts because if you’ve got that many rocks as you flex the body every single rock has to move against each other or over each other like tectonic plates. It can never squash or stretch otherwise it looks like latex.”

Surtur began with an anatomical diagram, something Morrison calls “the hollow man approach,” with skin flayed off to expose the muscle structure and tendons. “It’s like he has a muscle suit on as a base layer and fire is running down those lines,” Morrison details. “Then you build up these extra layers on top of him. Method Studios called the stuff slag which is the black crusty molten lava; it becomes a layer that sits on top of that. When Surtur is moving, bending, talking and fighting you see those chunks and crusts of magma forming and cracking again. It’s a similar technical rigging operation where none of that stuff can ever squash or stretch otherwise it looks like it’s plasticine or Playdough. But if you make it so they’re all rigid pieces breaking and flowing apart connecting together again it’s a lot more convincing. We did the same thing with mega Surtur and had to cheat the scale of the fire. It turns out if you have fire at the actual scale on mega-Surtur -- which is 30,000-feet tall -- what it ends up looking like is a big set of furry pajamas!”

Thor and Loki have to contend with their sister who has plans to rule Asgard with an army of the dead. “Hela was tricky,” Morrison admits. “We wanted to make sure that we were able to keep a hold of as much as Cate Blanchett’s performance as possible. The thinking on that one is if you’ve got an Oscar-winning actress then you don’t want to ever let the CG being anything but a lens. What we tried to do was build all of the motion capture technology into the actual sets where Cate was performing and then sewed these tiny active tracking markers into her real Hela suit; it meant that the subtlest motions that she did translated directly into the suit. It was successful. As for the antlers that she has to wear we basically took a leaf from Jack Kirby’s book and in almost every shot they’re different. We reposed them. There could be a different number of them. Kirby just always made sure that they looked cool in every single panel and that was good enough for us too.”

A new addition to the Thor cinematic universe is a junkyard planet. “Sakaar is definitely based on all of the Jack Kirby stuff in the sense that it’s heavy into the inkwork that he did,” Morrison relates. “Kirby always drew these long lines on spaceships as well as all of these crazy things that you can see on Silver Surfer’s surfboard and on the celestials. Because he inked so much of the page you could literally only fill in one of his characters with a single primary color. It was only when you got five characters together and each of them was a different primary color that it suddenly started looking colorful. It’s the exactly the same approach that we took with Sakaar. Each building is made from spaceship parts and has a single primary color. It’s only when you get to the wide shot that you see we built Sakaar from all of the colors that are known to man.”

Serving as the link between all the Nine Realms of the Norse cosmos is a crystalline, prismatic bridge. “The Rainbow Bridge [Bifröst] was one of the more difficult things because movies are always evolving,” notes Morrison. “The final battle was shot on the Stone Arch Bridge. Our production designers [Dan Hennah and Ra Vincent] built a section as a big set; it’s like a sandstone bridge with these curved dragonheads that arch over the top of the bridge. While in post it was decided that the story made a lot more sense if we’re on the Rainbow Bridge and nearly at the Observatory. Then we had to go through and cut out every single Asgardian in the entire third act battle and replace the Stone Arch Bridge with the Rainbow Bridge,” he says.

“The Hela flashback when we go into Hell is a standout scene because it’s a combination of a lot of different technical and aesthetic challenges coming together,” Morrison continues. “In being able to shoot the actors and actresses and cramming their performances into less than half a second. There was this incredible lighting rig that could do a 360-degree lighting pass. It was then stretched out to five seconds over any given shot creating an otherworldly, almost new version of Bullet Time from The Matrix. It’s a different way of letting you spend time with the actors, understand what was going on, see how cruel and vicious Hela was, and how much it affected Val. There’s a shot where we’re following the horses as all of the Valkyrie fly down to attack Hela. Every single one of those horses had to be shot with stunt riders in a separate pass with camera angles setup in advance so that we knew exactly what the camera needed to be in order to make sure that the horse was the right size and passed through the frame at the right time. There are like 20 different Valkyrie in that shot so 20 different individual passes of the horses fly in. Then you have to take that, add CG capes, put wings on the horses and create the entire environment and all of the weaponry. Tying all of that stuff together across an entire sequence takes all of the different departments working together to come up with something as weird as that!”

Choc Chip Animation Riffs on Pop Culture in ‘The Art of Murder’
F is for Flake: The (Not So) Great Animation Robbery?
Re-VIEW: ‘Avatar: The Way of Water’ – A Miraculous Vision
‘Kung Fu Panda: The Dragon Knight’ Celebrates a Special Lunar New Year
END_OF_DOCUMENT_TOKEN_TO_BE_REPLACED