The Animatronics Man: A Practical Take on Gustav Hoegen 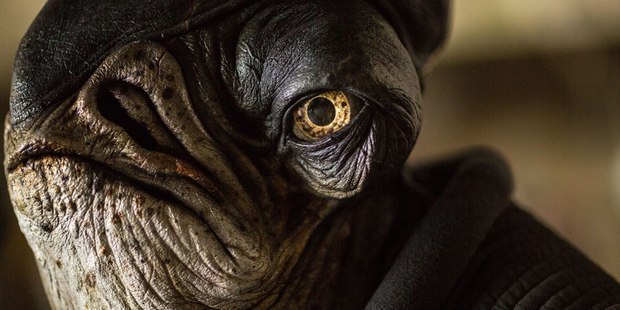 Gustav Hoegen has an immense and growing list of credits as a Supervising Animatronics Designer, those artists making mechanical, practical characters that they then perform with on set. Think of the Engineer and David’s Android head in Prometheus, the Vogons in The Hitchhiker’s Guide To The Galaxy, then Admiral Raddus (above) in Star Wars: Rogue One. Lately, among others, he’s worked on Star Wars: The Force Awakens, Rogue One, the soon-to-be released The Last Jedi, and Solo. “Growing up in the late 70s and 80s I was witness to the golden years of practical effects,” Hoegen says. “From an early age I developed a real love for sci-fi and fantasy films that relied heavily on practical FX.”

Living in Amsterdam, Hoegen was immensely curious about how they were built to perform on screen. “The detail in early films like Labyrinth, the Terminator movies, Aliens, Robocop and The Neverending Story. The fact they used tiny model kit bits on the Millennium Falcon for the early Star Wars movies, I found fascinating and I couldn’t get enough of it,” he says. “I would collect editions of Fangoria magazine and devour the techniques they showed, mainly from horror films. I was amazed how they made something that looked so realistic with their hands. Practical effects encompassed all my interests: film, design, drawing, sculpting and engineering.” As well as admiring the finished product, Hoegen wanted to explore the design of the creatures and how to physically construct a model so it could be crafted to move during the take on set. “Production design was another of my interests,” says Hoegen. “Aliens was one of the most beautifully designed productions. But, living in Holland, it seemed like a distant dream. There was no industry as such, in my area.”

Hoegen moved to Britain aged 19 and studied for two years at the Bournemouth Art Institute and he did a lot of work experience. “I stayed in London to try my luck, ‘on a wing and a prayer,’ as they say. I had no money in the bank in 1998 and I offered my services to a company called ARTem. ‘I’ll sweep your floors, I’ll do whatever,’” he told them. They took him on and he started his career there as a modelmaker working on commercials.  It was three years into the job when he turned to animatronics. He found his animatronic feet by helping artist Damien Hirst bring his Animatronic Man to life in a local exhibition. He went on to work on Terry Gilliam’s Brothers Grimm, assisting one of his mentors, another brilliant Animatronics Designer, Chris Clarke. The Vogons in ‘The Hitchhikers Guide to the Galaxy.’ © Touchstone Pictures

The Vogons in The Hitchhikers Guide to the Galaxy continues to be one of Hoegen’s most favorite creations because they were full screen characters. “They’re big, clumsy monsters,” says Hoegen, “but as a collective project, they came together so well. The experience of working at Jim Henson’s Creature Shop for the production was so great.”

In character creation and animatronic design, the shoot date is the moment Hoegen works toward. “It’s getting that creature on film, performing as designed, captured forever,” he says. The buildup to that point begins very early, building the relationship with the director. “You get your brief or you start in the dark,” he adds. “Especially with animatronics, you have limited time so it’s useful to know what the model needs to do on screen for those few moments, so you can work towards that one goal. Refining the directions so you only make necessary things that benefit the shots.” Hoegen says it’s great to go on set and have room for maneuver, after the director has signed off the models. Depending on how close the character is to camera, the animatronics man becomes a performer, an actor, and can take advantage of improvising on the spot. “On my latest movie, the director saw the creatures I had brought in and liked them so much, made up extra things for them to do,” says Hoegen. “‘What can we do with them now?’, he was heard to say. ‘What else is funny?’ And that’s one of the benefits of having something practical on-set because it comes down to freedom of performance.”

Having found his mark on creature animatronics, Hoegen hasn’t slowed down from there, with later projects creating live Engineer heads and slimy white eels for Ridley Scott’s Prometheus. “Being a big fan of Ridley Scott, the Aliens film is one of the reasons I’m in this game,” he says. Admiral Raddus from Star Wars: Rogue One was another of Hoegen’s. “He had a starring role, he carried a scene, had lines and he directed the battle of the Rebel fleet, which was incredible,” says Hoegen. “I was a little worried that he was going to be replaced with CG, but he’s there in his full glory.”

Hoegen recognizes a welcome swing back to using practical effects, augmented with VFX. Working recently on the Star Wars movies, there’s been more collaboration with VFX crews on set, all to improve the characters. “There are more monstrous characters in Sci-Fi and Fantasy movie scripts these days, like the comics and game-based franchises we’re now seeing,” he observes. “And now, there are a lot more practical creatures in those films.”

“This is a move to recreate the old feelings of the first trilogy of Star Wars, playing to the nostalgia of the audience,” Hoegen notes. “We can make a big puppet and have five puppeteers standing by, on-set with the VFX team, in close collaboration. A classic example is BB-8 from Star Wars: The Force Awakens where the crew was always in shot, then matted out in post.” The creative freedom Hoegen experienced on his Star Wars journey, starting with The Force Awakens, was a wake up. “If we had an idea, the director would be very supportive of our ideas and suggestions and in any previous films, that had only very rarely happened.” In low-budget productions of course, there’s not as much freedom because anything extra would be more cost.

Servo technology and programming systems have upgraded a long way, which makes a massive difference in construction time and cost for practical characters. These days, you can get much more powerful and smaller servos into much smaller spaces. The servos can be small enough to sit inside a wearable head of a silica model character, and still lift a large expression in a character. “But in broad strokes, we’re still relying on techniques we used in the 80s,” adds Hoegen. “We just apply more precision, more finesse.”

Recently Hoegen worked on an animatronic head with more than 50 servos, which, “fifteen years ago would have had bunches of cables hanging out of its head. That was really hard to work with back then,” he says. “Nowadays, the system is beautifully self-contained, the operating system is inside the head and the only thing coming out of it is one power lead.” The later model 3D printers and CNC routing machines have also made the job of creating these mechanical models much easier. Characters can be created on a computer but Hoegen still likes to “build the workings and finer details by hand, it’s a personal thing really. We don’t build our own servos, but we keep our eyes out for the best brands; Futaba, Dynamixel, MKS; these are fantastic. Brushless, flat-form, very powerful servos for facilitating some great animatronic moves.”

Hoegen has never worked in Los Angeles. “I’m very fond of being in Britain and in Europe,” he says. “At the moment, we have the most vibrant film industry in London, everything seems to happen right here. We are craft-people and are very down-to-Earth. All the people I have around me are craft-base people, especially here in the workshop and out on a set, which is great. It keeps me focused.”

Paul Hellard is a freelance journalist and former editor at CGSociety.org.