The 2018 VFX Nominees: Doubling Down on Digital Effects

Group of 20 nominees draws on two decades of experience and technological advances, delivering shots that were previously unimaginable. 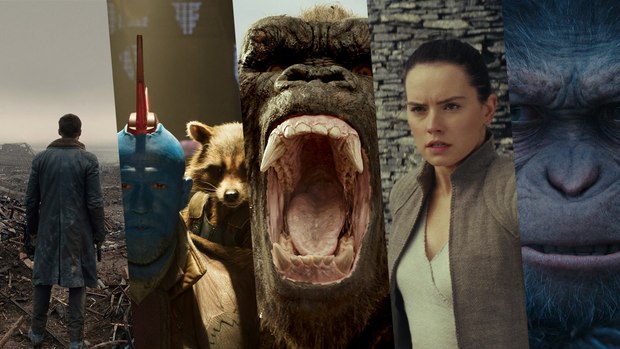 The work in the five films in the running for a 2018 Oscar has elevated the state of the art in every area of visual effects.

Something struck me about the 2018 group of Visual Effects Oscar nominees. The nominees always represent the best in class, of course, having been chosen by their peers. But the group of nominees this year seems particularly exceptional. The only disappointing note is a lack of diversity, and hopefully this will change in the future. That aside, among the 20 men nominated, note that eight have previously received Oscars for visual effects, and as a whole, the group has received an astounding 62 Oscar nominations. Only four received their first nomination this year, three of whom are special effects supervisors responsible for practical effects.

I often hear artists say that there has been no better time to do visual effects. In terms of digital effects, hardware speeds have made shots possible that were cumbersome at best or perhaps not even imagined only a couple years ago. Rendering software running on the fast hardware can emulate and match real-world light transport. Hardware can handle intricate simulations quickly enough to allow art direction, and give animators more interactivity with complex models. Scanning systems can capture light reflectance and textures from human faces. Taking advantage of that amplification are many artists now drawing on two decades of experience creating visual effects with their colleagues and guiding those newer to visual effects. The work in the five films in the running for a 2018 Oscar has elevated the state of the art in every area of visual effects.

Two films feature digital humans -- Snoke in Star Wars: The Last Jedi and Rachael in Blade Runner 2049. Three have digital characters in leading roles -- War for the Planet of the Apes (Caesar, Bad Ape, Maurice, and others), Guardians of the Galaxy Vol 2 (Rocket and Groot), and Kong: Skull Island (King Kong). Digital characters also occupy important supporting roles: Hundreds, perhaps thousands of various ape species act and many have dialog in War for the Planet of the Apes; the skull crawler, bamboo spider, and squid play monstrous roles in Kong: Skull Island; Maz, the Fathiers, Crystal Foxes, an alien toad, cute Porgs (animatronic and digital), and BB8 (animatronic and digital) in Star Wars: The Last Jedi remind us why we love that series; the holograms in Blade Runner 2049 remind us that movies are magic; and there are probably more I’ve forgotten.

Behind the stars, some “invisible” CG environments gave these films location and scale (Blade Runner 2049, King Kong, War for the Planet of the Apes). Other CG environments were front and center -- the fractal planet in Guardians of the Galaxy Vol. 2, the space ship battles in The Last Jdei.

Shots we’ll remember: An anticipated explosion that becomes, instead, a silent, shattered moment in The Last Jedi. Caesar’s moral conflict played out on his face in Apes and Caesar in the snow. Snoke’s face in Star Wars and the light saber fight between Rey and Kylo Ren in Snoke’s red throne room. Ego’s planet in Guardians -- and that opening title sequence. Baby Groot. The monster that is more than an ape against a fiery sky in Kong. Joi and Mariette merging in Blade Runner 2049. Blade Runner 2049’s hall of slightly moving replicants, and Rachael reborn. Blood red crystal lines sliced into a white salt crust by ski speeders in Star Wars. Kong with water pouring off his fur eating that squid in Skull Island. What a shot. What a group of films.

Of course, as any VFX supervisor will tell you, the goal of visual effects is to support the story. But without visual effects, these films’ stories could not have been told -- or at least not to the tune of hundreds of millions of box office dollars, anyway. Interestingly, as a side note, it was fun to discover that four of the five overall supervisors trace their careers back to early days and early breakthrough films at Industrial Light & Magic. I’m sure there are other connections, as well, among all the nominees, but here are those:

John Nelson (Blade Runner 2049) and Stephen Rosenbaum (Kong: Skull Island) were CG animators at ILM on the 1991 Terminator 2 and both went on to earn Oscars, Nelson for Gladiator and Rosenbaum for Avatar. Joe Letteri (War for the Planet of the Apes) and Rosenbaum were CG artists at ILM on the 1993 film Jurassic Park. Christopher Townsend was a digital artist at ILM on the 1996 Mission Impossible for which Letteri was associate visual effects supervisor. Letteri left ILM to join Weta Digital and received four Oscars -- for Avatar (along with Rosenbaum), King Kong, and Lord of the Rings: The Return of the King, and Lord of the Rings: The Two Towers. The fifth overall supervisor, British artist Ben Morris (Star Wars: The Last Jedi) who received an Oscar for The Golden Compass, is the only one of the five overall supervisors who weren’t at ILM in the early 90s, but he’s the only one there now. In addition to working as a senior visual effects supervisor, Morris is head of ILM’s London studio. Similarly, Letteri leads Weta Digital in addition to his role as senior visual effects supervisor. Rosenbaum, Townsend, and Nelson have been independent supervisors for several years now.

But just to be in this game is win enough. Guardians of the Galaxy Vol 2 War for the Planet of the Apes

Taking an Old-School VFX Approach in ‘All Quiet on the Western Front’
‘Natural Habitat Shorts’: Like ‘Ranger Rick,’ But for Adults
Framestore Sets Sail on ‘1899’ with New Virtual Production Tools
Animated Characters: The Art of Babbitt – Part 1
Bruce Smith and Ralph Farquhar Talk ‘The Proud Family: Louder and Prouder’ Season 2
VFX is the ‘Thing’ for Tom Turnbull on Tim Burton’s ‘Wednesday’
We Need to Chat
F is for Flake: The (Not So) Great Animation Robbery?
END_OF_DOCUMENT_TOKEN_TO_BE_REPLACED