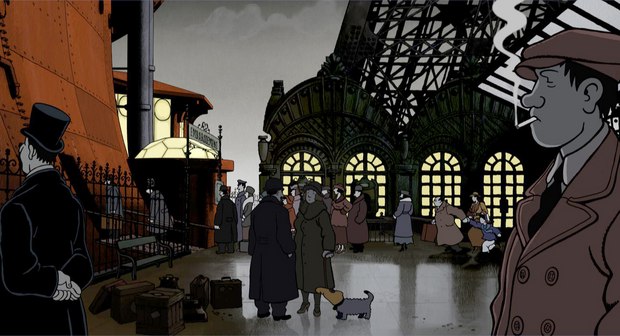 Jacques Tardi, the emblematic figure from the world of comics and graphic novels in France, is the recipient of the 1985 City of Angouleme Grand Prize as well as two 2011 Eisner Awards. Mr. Tardi is the author and creator of one of French comics' most famous heroines, Adèle Blanc-Sec, along with several books on World War I. In A Rigged World, set in the 19th century under the control of Napoleon VI and the Steamer, scientists are mysteriously disappearing and a young girl named April sets off to find her parents, both of whom are scientists. Produced by Je Suis Bien Content and Studio Canal in France, Kaibou in Canada, and Need Productions in Belgium, this animated feature is currently undergoing the animation production process using Toon Boom Harmony. Even if the pilot has been created fully on paper, it quickly became obvious it would not be possible to produce A Rigged World using this methodology. “The logistics involved in such a large scale production in addition to the fact that we were dealing with several studios in multiple locations led us to select a robust animation software,” explained Mr. Jousset, Producer at Je Suis Bien Content.

Following a thorough evaluation of the different technologies available in the industry and confident that vector technology would grant us the most flexibility and compatibility with Mr. Tardi’s designs, the team at Je Suis Bien Content opted for Toon Boom. “We got very positive feedback on Harmony from TouTenKartoon, the studio in charge of a portion of the 2D and 3D animation in Montreal,“ added Mr. Jousset. Also, knowing Toon Boom offers a local presence in France via Canopéa-Formation for representation and support convinced them to go forward.

For this project, TouTenKartoon will create over 30 jobs in Montreal, for a duration of six to eight months. Over a duration of three months, directors tested Toon Boom Harmony using Wacom Cintiq drawing tablets. “Above all, the gains in time Harmony can bring us throughout the animation production phase played a key influence in our decision. It’s also a more flexible software, making logistics a lighter process,” shared Mr. Jousset. Je Suis Bien Content was already equipped with Toon Boom Storyboard Pro, “a very good software for which we have developed several plug-ins. It was logical to continue the process using the Toon Boom pipeline.”

Since Canopea offered tailored training sessions, Je Suis Bien Content was even more comfortable with its decision. “When Je Suis Bien Content contacted us, the directors clearly stated their specific needs in terms of training, which we could customize to address them,” commented Matthieu Sarazin, Head of Canopéa-Formation.

To address their specific production needs, Toon Boom worked closely with the 30-animator team in Paris all working on Toon Boom Harmony. To further its collaboration, Toon Boom has developed special features, as per the request of Je Suis Bien Content and Camille-Elvis Théry, who is responsible for the production pipeline supervision.

“The great advantage with Toon Boom is to have a team ready to listen and adapt the software to our needs,” explained Mr. Théry. “This is major as it enables us to optimize our workflow while making Harmony even more in sync with market requirements,” he concluded. Among the specific features added for A Rigged World, we can mention the ability to save import and export preferences as well as the ability to merge layers in order to share one single file that includes all data instead of individual layers one after the other, all translating into significant time savings.

Another feature relates to the Split Sequence script, which offers a greater organization in the sequence work. “For this feature, we are working with whole sequences as cleaned-up storyboards. Thanks to the Split Sequence script, we have a Shot Markers column which lets us split a scene, while updating it to remove all empty layers,” explained Mr. Théry.

“Collaborating with studios such as Je Suis Bien Content on such ambitious projects as A Rigged World falls right into Toon Boom’s expertise,” stated Jean-Raymond Lemieux at Toon Boom. “We aspire to deliver not only a robust technology but also a wide array of services and tailored professional training that addresses the animators’ specific needs to ultimately give them more creative freedom.”