Construction to begin later this year on first-ever Disney park ‘land’ based on 2016 Oscar-winning animated feature. 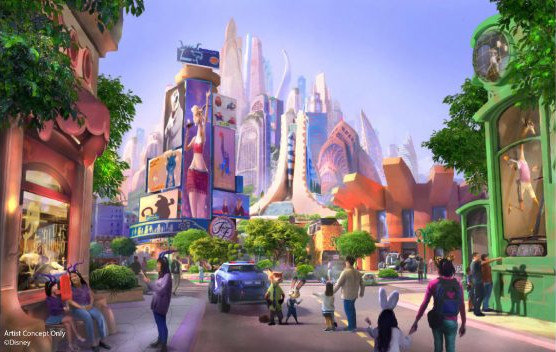 The first-ever Zootopia-themed land at any Disney park is coming to Shanghai Disneyland, with construction slated to begin later in 2019, the company announced yesterday. Based on Disney’s 2016 Oscar-winning animated feature, Zootopia, the new expansion will become the park’s eight land – the news comes less than a year after the opening of the park’s first major expansion, Disney•Pixar Toy Story Land. No details were provided regarding the expected cost or completion date of the project.

Zootopia was a box office champ, generating more than $1 billion globally, including $235 million in China, where it became the country’s top grossing animated film in history. Shanghai Disneyland, which opened June 16, 2016, reportedly drew 11 million visitors in 2017.

“We are thrilled to announce that Shanghai Disneyland will be home to the world’s first Zootopia-themed land,” said Bob Chapek, chairman of Parks, Experiences and Consumer Products, The Walt Disney Company. “The rapid rate of expansion at Shanghai Disney Resort demonstrates our confidence and commitment to the Company’s future development in China.”

According to a Disney statement, “Guests will be invited to experience the mammalian metropolis of Zootopia ‘where anyone can be anything,’ with a new major attraction that will seamlessly blend Disney storytelling and state-of-the-art technology to bring this fan-favorite movie and its characters to life – including Judy Hopps and Nick Wilde. Entertainment, merchandise, and food and beverage offerings will invite guests to fully immerse themselves in the animated movie.”

“Since the resort’s Grand Opening in 2016, Shanghai Disneyland has gone from strength to strength - continuing to expand and enjoying ever-rising attendance rates while also providing a safe and enjoyable experience for our guests,” said Yang Jinsong, chairman of Disney’s Chinese joint venture partner for Shanghai Disney Resort - Shanghai Shendi Group. “Shanghai Disneyland has rapidly become one of the fastest growing Disney parks and has been key to the development of the Shanghai International Resort as one of the most visited leisure destinations in the country. This new expansion will provide our guests with an even richer selection of offerings, and will further boost our market competitiveness.”