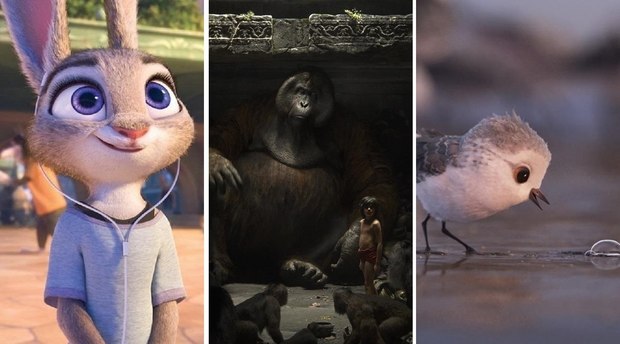 “Wow, thank you guys so much. Thank you, Academy, this is an incredible honor,” Howard commented upon accepting the award. “About five years ago, almost six now, oh my god, we got this crazy idea to talk about humanity with talking animals in the hopes that when the film came out, it would make the world just a slightly better place.”

“And we are so grateful to the audiences all over the world who embraced this film with this story of tolerance being more powerful than fear of the other,” added Moore.

Zootopia producer Clark Spencer gave thanks to Bob Iger, Alan Horn, Alan Bergman, John Lasseter, Ed Catmull and Andrew Millstein for “creating an amazing studio for us to work at. And every artist, technician and manager at Disney Animation who poured your heart and soul into this film, this award belongs to you.”

“Honestly, we’re only here because of the kind support and mentorship of many,” Barillaro said from the stage. “I have to thank John Lasseter, Andrew Stanton, Lindsey Collins, Jim Morris and Ed Catmull. My parents, my wife Nancy, my three little pipers at home who inspired this story: Theo, Cora, Marcello. I love you, and may you always have the courage to face your fears.”

On the visual effects side, Robert Legato, Adam Valdez, Andrew R. Jones and Dan Lemmon took home Oscar gold for Disney’s live-action remake of The Jungle Book, beating out the VFX teams from Rogue One: A Star Wars Story, Doctor Strange, Kubo and the Two Strings and Deepwater Horizon.

“Oh my god, thank you,” Legato, speaking for the team, said from the stage. “This never gets old, by the way. All great experiences start at the very top and I have to say that’s Alan Horn, who gave a fantastic job to Jon Favreau, a collaborative director, who is fantastic. Literally unprecedented support from all of the Disney brass, including Sean Bailey, Dave Taritero, Sam Dickerman, Pete Tobyansen and our producer, Brigham Taylor. And last but not least, these three gentleman geniuses behind me, who commandeered a thousand superb artists and contributed so greatly and made so many winning decisions that, you know, they actually got tired of winning. Like that’s a thing. I think I’m done. Thank you to all our artists. The next round of applause is for you, you deserve it as much as we do. Thank you so much.”

The full list of nominees and winners is shown below, with the winners marked in bold:

Performance by an actor in a leading role

Performance by an actor in a supporting role

Performance by an actress in a leading role

Performance by an actress in a supporting role

Achievement in makeup and hairstyling

Best motion picture of the year