Animated Feature directed by Arthur de Pins and Alexis Ducord from the French overseas province Island of Réunion also selected to screen in competition at Annecy 2017. 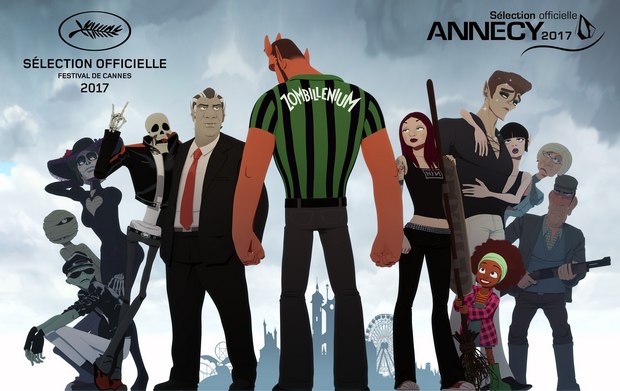 Zombillénium will be presented as an official selection in the Children’s Screening program at the 70th Festival de Cannes on May 24th.

The animated feature directed by Arthur de Pins and Alexis Ducord and produced by Henri Magalon for Maybe Movies, is a family comedy adapted from the graphic novels by Arthur De Pins. The animation for the movie, completed under the supervision of animation director David Nasser and animation production manager Arnauld Boulard, was mostly produced at Pipangai Production on the Island of Réunion, a French overseas province located to the east of Madagascar. It was produced by Maybe Movies and Belvision in co-production with Dupuis Audiovisuel, Gebeka Films, France 3 Cinéma, 2 minutes, Pipangaï Production and Gao Shan Pictures, with the support of Reunion Region Fund in partnership with Centre National du Cinema.

“After our first movie Adama, was nominated for Best Animated Feature at Césars 2016, European Film Award and Annecy 2015, this year’s selections show that our studios have reached the state-of- the-art level for independent features and attract the best talents since Arnauld Boulard settled on the island three years ago,” the filmmakers commented.

Zombillenium will also be the opening-night film and screening in competition at the 2017 Annecy Festival. The studio is currently working on Funan, the new people, directed by Denis Do (Les films d’ici), and White Fang, directed by Alexandre Espigares (Superprod).

Zombillenium, the Halloween theme park, happens to be the one place on earth where real monsters can hide in plain sight. When Hector, a human, threatens to disclose the true identity of his employees, the Vampire Park Manager has no other choice but to hire him. To see his daughter, Hector must escape from his Zombies and Werewolves coworkers.