NBC Sports, Bodega, Northern Lights and Zoic Studios take the stage with The NFL’s best for ‘Waiting All Day for Sunday Night.’ 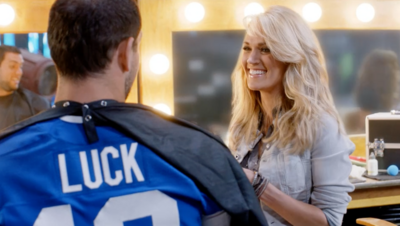 “We know we will see plenty of intensity during the game, but the open is really about setting the stage for that in a fun and more unexpected way. Last season Fred Gaudelli, the Coordinating Producer for SNF, wanted to introduce more interaction in the open between Carrie, the players and the fans. This season we worked with Haley and the Bodega team to take that notion of interaction and access a step further, introducing a behind-the-scenes component that enabled us to toggle between a raw/spontaneous feel and a refined/choreographed performance,” notes Tripp Dixon. “Shooting on a big sound stage played into our behind-the-scenes concept nicely…all the lights, equipment and buildings in the periphery evoked a big production feel.”

“A few weeks after putting the final touches on the Super Bowl XLIX open, we were in a room brainstorming this year’s open…challenging ourselves to think differently,” said Haley Geffen. “It’s Carrie’s third season working with us and at this point the set feels like a legitimate family. Why not give the viewers an inside look into this environment, peel back the curtain a bit and show fans what we experience on set with a superstar and a cast of marquee NFL players.”

Zoic Studios was brought on board to telegraph stadium environment intensity to living rooms across the nation. Zoic ECD Chris Jones and VFX Supervisor Julien Brami led the team to intertwine the kinetic stage graphics with the live-action footage of Underwood’s performance and the NFL players to simulate an immersive concert environment.

“Not only was it exciting to work on a project for NBC Sports, it was also a great experience to collaborate with Haley, Tripp, and the entire team that has put this major project together for several years running,” notes Brami. “It was an exciting challenge to create a visually perfect new world for the audience to enjoy and feel a part of.”

Adds Geffen,“Our relationship with NBC Sports is proven and there’s nothing better than trying to outdo ourselves year after year.”