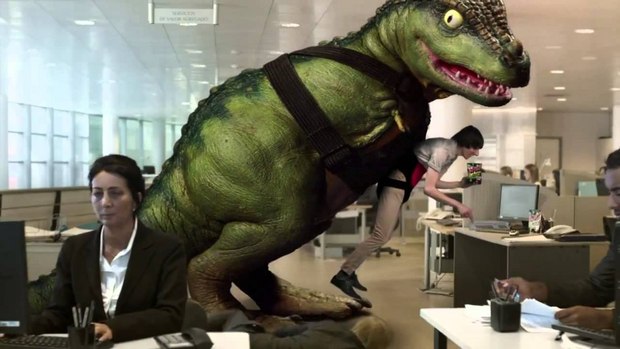 Culver City, CA-based VFX shop Zoic Studios takes off on a blissful dinosaur adventure in the new 30-second “Dino Trip” for Trolli out of Periscope, Minneapolis, MN. The spot features a peculiar man gleefully going about his day-to-day life while strapped to a T-Rex, making a supermarket run, going to work, going for a walk in the park, and taking a romantic stroll on the beach, all while blissfully unaware of the odd nature of his transportation.

The spot is the continuation of a campaign that launched in April, which included the 30-second “Sour Brite Crawler Minis” and the 15-second “Feed Your Sour Tooth” that aired in May 2015.

The Zoic team, led by Chris Korn, utilized a stop-motion dinosaur to amplify the humor embedded in the awkward trek, starting in Z Brush to create an initial design and then crafting a stop-motion armature based on those templates. Next, they pieced the armature together and built the sculpture on top of it, filled their mold with foam latex, and painted the final model. For animation, seasoned stop-motion animator Kim Blanchette utilized stop motion animation software Dragonframe to create the desired aesthetic.

An early passion for stop-motion animation spurred by King Kong combined with a background in makeup effects and prosthetics made Korn a fitting designer for this project. “It’s a really great change of pace to get out of the computer and physically create something with your hands and then animate it to come to life even further,” he notes. “Each step of the process was surprising and an enjoyable challenge.”