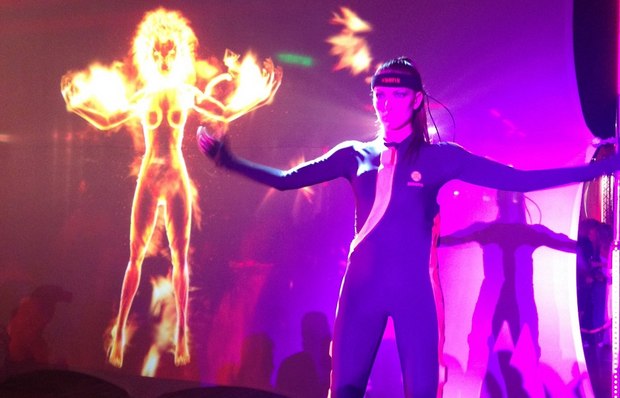 Los Angeles -- Leo Burnett Chicago teamed up with Culver-City-based VFX house Zoic Studios to immerse 2014 festival-goers into a stylized digital world of fire and ice for the opening and closing galas of the Cannes Lions International Festival of Creativity.

Zoic crafted the stylized Chimera utilizing the real-time rendering power of the Unreal Engine 4. The setup combined the Chimera character with data capture from the Xsens motion-tracking suit worn by a live dancer on stage. The dancer’s movements were expertly calibrated to trigger unique effects, such as clapping her hands to send a burst of embers swirling about the environment, or lifting her hands to emit flames from the Chimera for the fire-themed opening gala. For the closing gala, the design segued into the evening’s ice theme, with the dancer’s movements triggering opulent waves of frost.

Woodbury brought together the companies contributing the events’ graphics to craft a cohesive visual package for each event, artfully weaving in the themes. He notes, “The concept of doing fire and ice themes was to immerse people in the two different elements and to take a unique opportunity to make it snow in the south of France!”

The Mill created cinematic and dramatic imagery inspired by the ethos of the 12 common archetypes, transporting these characters into contemporary surreal atmospheres. The visuals begin with a showcase of some beautiful parts of Cannes, integrating the fire theme. The visuals then segue into the archetypes, punctuated with ambient graphic moments that move in between moments of each character.

Leo Burnett’s Interactive group created the graphics for the DJ booth as well as all of the graphics that appeared on the screen at the end of the Carlton Beach pier.