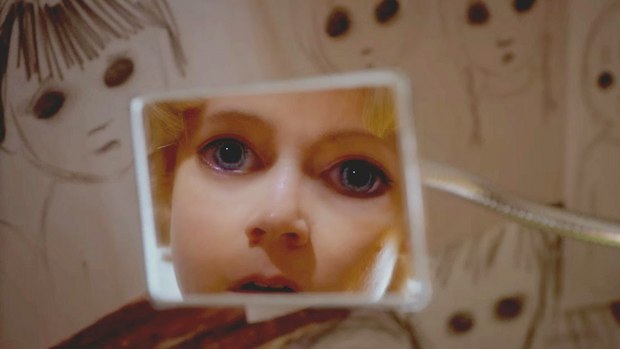 Vancouver, B.C. -- For Tim Burton’s latest live action feature Big Eyes, Zoic Studios VFX Supervisors Mark Stetson and Ralph Maiers led a team of artists to revisit the effervescence of a pop art sensation in the wake of the Golden Gate Bridge. Zoic Studios worked from their Vancouver and Los Angeles studios to craft the visual effects for the film, comprised of 155 VFX shots.  Big Eyes, starring Amy Adams, Christoph Waltz and Jason Schwartzman, offers a loving look at the artist Margaret Keane, whose husband Walter Keane created a cultural phenomenon in the 1960s with their mass market approach selling her paintings of stylized, big eyed waifs; paintings which were seen by some as art, by others as kitsch. The Zoic team leveraged their vast expertise in period authenticity to bring vintage San Francisco to life in Vancouver as well as transferring the iconic saucer eyes to live action characters in the film. The film was shot on ARRI Alexa primarily on locations and stages around Vancouver, followed by short shooting schedules in San Francisco and Hawaii to complete principal photography.

Zoic’s Features Visual Effects Creative Director Mark Stetson previously worked with Burton and Production Designer Rick Henrichs, earlier in his career in miniature effects and quickly re-established a creative rapport with the director on this film. Additionally, notable matte artist Syd Dutton led the environments team and not only brought his extensive industry expertise, but also first-person memories of growing up in San Francisco in the 1950s and 1960s, leading to a vivid series of concept sketches for the locations. He artfully blended details from various historical locations to convey the romance of the period to a modern audience, all while maintaining Burton’s carefully composed and signature visual style.

While the environments work was being developed, Tim Burton also asked the Zoic team to handle concept work for Margaret’s hallucinatory vision of people around her with big eyes like her paintings. Using visual effects producer Lauren Weidel as a model, Ralph Maiers and Kenton Rannie developed a series of looks to explore how far they could distort a human face to the proportion of a big-eyed waif, without breaking the barrier of disbelief by making it too grotesque. This work also guided the shot of Margaret seeing her own reflection with eyes evocative of her own paintings.

Following principal photography, the Zoic team worked closely with editor JC Bond to execute Burton’s vision for the visual effects work. Zoic’s high-speed pipeline and integrated facility tools allowed Dutton and Stetson in Los Angeles to collaborate closely with Maiers and the team in Vancouver to transform the approved concepts into finalized shots. As the cut took shape, Zoic also worked on an added sequence for the opening titles that would portray Margaret and Jane’s journey across California’s central coast. Contending with rampant drought conditions, the Zoic team revitalized these shots to deliver the verdant beauty of the land that would set the tone for the beginning of the film.

Late in postproduction, Zoic was tasked with six additional matte shots, including two establishing shots of Hawaii, a fabricated stylized shot of the 1964 New York Times entrance in Manhattan, a shot of a fictitious French restaurant set in San Francisco’s Powell Street, an established shot of Chinatown and an establishing shot of a San Francisco nightclub. Notes Stetson, “These shots were the biggest and most challenging in the film for us. They were also the most satisfying, because Tim gave us a lot of responsibility for their design and execution. We packed a lot of production value into these shots.”

Throughout post production, the Vancouver team took advantage of their proximity to many of the shoot locations, returning to take additional reference measurements and photographs to ensure the final shots had all the right detail. After finishing was completed, the Zoic team once again took advantage of their advanced pipeline to complete the VFX work to ACES specifications with Open EXR format. This allowed for a clear step forward in image quality that led to great flexibility with files integrated from ARRI, RED, Nikon and Canon.