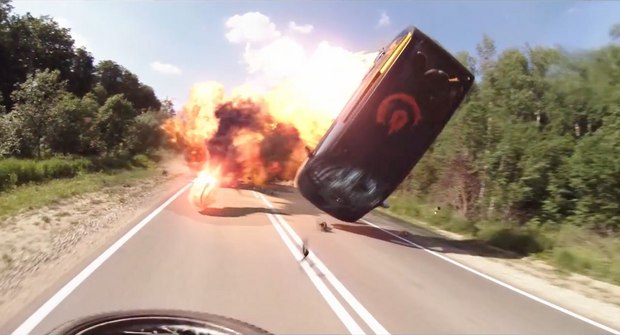 Boston and Santa Monica-based ZERO VFX was charged with working on the action-packed chase sequence for Hardcore Henry, the partially crowdfunded action-thriller from Russian director Ilya Naishuller. Filmed with a GoPro camera worn by a stuntman-cameraman lead, the first-person action is blisteringly paced and intensely violent, rushing headfirst through wince-inducing hand-to-hand battles, blood-drenched shootouts, and one truly explosive highway car chase. ZERO VFX created a plethora of CG elements within the confines of frenzied GoPro footage to bring the scene to life.

“Well…it’s quite the sequence,” begins ZERO CEO Brian Drewes, reminiscing on the blood-pumping highway chase. What begins with Henry and sidekick Shartlo Copley pursuing a convoy in the distance soon turns into a non-stop, screen-shaking action set-piece, replete with vans torn apart by miniguns, motorbikes riding through the innards of trucks, and grenades hurling vehicles high into the air.

The action is so over-the-top it feels it could break free from its careful choreography at any given moment. ZERO was ready in post to ensure the feeling of controlled chaos remained consistent throughout.

“We worked on a lot of full-CG elements to really sell the sequence, augmenting what was shot on set,” says Drewes. ZERO created a full-CG convoy, witnessed in the distance. As the heroes get closer, the convoy is replaced by real trucks, which the pair attack with a side-mounted minigun.

“We added muzzle flashes, as well as all the damage caused to the truck,” Drewes recounts. “We really tore it to shreds, creating all of the debris, the particles flying off from the bullet hits, the blood, and the shells pouring from the minigun.” The ZERO team also simulated these shells to follow the speed and action of the motorbike, peppering them across the road whenever Henry looks back.

Other augmentations included additions to a semi-truck which the hero clambers up, over and underneath.

“We covered it with CG damage, like a broken windshield, and in one sequence we created a digi-double character who flies through that windshield following a collision,” Drewes continues. “We also created the CG overpass in the background that threatens to kill Henry before he can jump into the semi.”

The real standout moments that occur during the sequence are even more destructive. One shot sees Henry drive right through the center of the van on a motorbike -- “We added smoke, sparks, and other debris to really increase the impact,” says Drewes -- and several shots required huge explosions that tear the vehicles asunder.

“That’s the biggest eye candy,” Drewes adds. “It was a case of enhancing some of the practical effects carried out on set, and also creating – and then destroying – completely CG vehicles. We created the engulfing fireballs and everything that sprays out, enhancing the visceral sense of danger of being right there on that road.”

Another element that makes the sequence stand out is that it appears to take place in one continuous camera move. The sequence is in fact comprised of nearly 45 different shots stitched together in post. ZERO’s job wasn’t just to create anarchy, but to bring it together with grace. “There had to be no indication that there were any cutaways throughout the chase,” explains Dan Cayer, VFX supervisor at ZERO. “Given that these shots were filmed at different times, and some had hard cuts from the camera, that was a major task. Also, we joined the project after it wrapped, so had to utilize a lot of our creativity to ensure each shot matched up without on-set scans and lighting information.”

One example of a particularly challenging task saw ZERO blend two shots filmed 180 degrees in completely opposite directions. Using a variety of creative techniques, ZERO collapsed the two shots into one, imparting the impression that Henry had simply turned his head. It was approached in such a way as to convince the audience that no CG augmentation had been applied.

“We had to do that kind of stitching and blending across each of the 45 different shots, and each was incredibly distinct, so there was little to no opportunity to standardize or repeat the approach,” says Cayer. “We had to approach each as if it was a completely bespoke challenge. It was a case of just getting our heads down and working through each shot. We couldn’t be more pleased with the final result.”

Another challenge that permeated the sequence came in the technical specifications of the GoPro. The same effect that makes GoPro footage so distinctive -- its curved, wide-angle lens -- was also the element that made even simple bread-and-butter VFX difficult to implement. “If you look at a fisheye lens undistorted, completely flattening it, the footage looks almost like a four-point star,” explains ZERO VFX supervisor Don Libby. “Having to work visually on that, placing CG elements in that world, was certainly challenging.”

ZERO would have to implement elements such as CG blood and sparks into the flattened, undistorted frame, then make sure that these additions still looked well integrated when the distortion was added back in. “That’s a very different way of working, and one that made even simple VFX shots something that we really needed to think about,” adds Libby.

The ZERO team would also have to accommodate in the render size the distortion amount that would happen around the edges of shots. “We were actually rendering a lot larger frames than we normally would just to accommodate the distortion,” says Libby. “There’s a lot you have to think about to get it just right.” “Many of the things you’d usually try to avoid in VFX, this project had in droves,” says Drewes of Hardcore Henry. Nevertheless, it was Hardcore Henry’s indie nature and ground-up approach that attracted ZERO to the project in the first place. Even if it did come with a host of creative challenges, it was worth taking them on to work on a project this inventive, this daring, and this ambitious.

“However Hardcore Henry was truly a passion project for the team,” he continues. “We were able to say, ‘Our A-team is working on this, and they’re going to get it done, and done right. We weren’t trying to sell cheaper alternatives just because we weren’t working with the same resources as a multi-million-dollar action film -- every decision we made was for the benefit of the project.”