Iconic scenes from Disney classics, with enhanced audio and no dialogue or music, have been edited together into 10 shorts designed to help audiences unplug, relax and refresh. 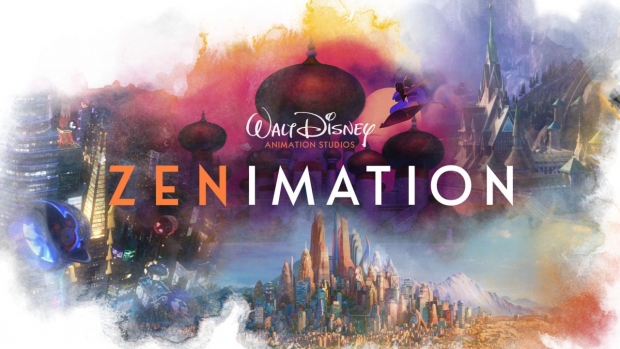 Zenimation, a short-form 10-episode series created exclusively for Disney+ by Walt Disney Animation Studios, debuts today, May 22, 2020. The series is another example of Disney's ongoing support for short form animation; the first 14 films of their innovative experimental Short Circuit short film program, all from first-time directors, debuted on the streaming platform this past January.

According to the studio, Zenimation will help audiences unplug, relax, and refresh their senses for a moment of mindfulness as they enjoy an animated soundscape experience.  “Whether it’s baby Moana being called by the ocean, Anna and Kristoff walking through an icy forest, or Baymax and Hiro Hamada flying over San Fransokyo, these iconic scenes become an aural experience like no other with the sounds of ocean waves, an icy forest and soaring flight. Zenimation pays tribute to both the visual and sound artists who have created Walt Disney Animation Studios’ legacy of films.”

The series, which aims to give viewers moments of relaxation and “ASMR”-like mindfulness, had its origins at the 2019 D23 Expo, Disney’s largest fan event. “We were trying to come up with materials for the Disney Animation booth at D23 Expo,” says David Bess, the series’ creator and editor for Disney Animation, whose work often focuses on the creation of short-form promotional films for the Studio. “The Expo is fun and fast-paced, and I thought it would be helpful to the Expo-goer to have something to watch and relax to from our animated films. I started thinking about those moments in our films where our characters are mindful. They’re aware of their surroundings, they’re living in the moment, taking in what’s around them.”

The 10 episodes are as follows: Water - Explore the sea with Moana, Ariel and Elsa. Discovery - Discover the world around you with Elsa, Tarzan, and Rapunzel. Flight - Fly with Aladdin and Jasmine, Baymax and Hiro, & Cody and Marahuté. Night - Gaze at the night sky with Tiana, Rapunzel, and Jim Hawkins. Nature - Take in the beauty of nature with Simba, Pocahontas, and Tarzan. Serenity - Have a moment of calm with Belle, Mulan and Gramma Tala. Water Realms - Surf with Lilo, cross the Dark Sea with Elsa, & restore the heart of Te Fiti with Moana. Levity - Have a laugh with Flash the Sloth, Stitch and Baymax.

“If we do a really good job in sound design, people don’t notice that we did anything,” says Shannon Mills, supervising sound editor for the Zenimation series (and supervising sound editor and designer for films such as the Academy Award-winning Big Hero 6 and the upcoming Black Widow). “Often times, when we’re doing sound effects work, we share the stage with music and dialogue. It was very cool to see that this project would feature the work of the sound designer.”

Taking the one-scene concept from D23 Expo, and making it into a series, was the result of a partnership with Bess, executive producer Amy Astley, and the Disney+ team of Dan Silver (VP, Originals for Unscripted Content) and Jordan Gilbert (Director, Originals – Short Form Content) at Disney+.

“The Disney+ team saw potential in the concept right away and championed the series from the beginning,” says Astley. “There’s such a wonderful spirit of collaboration and experimentation when working with them.”

Zenimation showcases the incredible sound design throughout its history of films, but once Bess began to create the episodes, it was clear additional sound design would enhance the experience for the viewer. Shannon Mills was brought in by Berenice Robinson, Walt Disney Animation Studios’ VP of Post Production. Mills, who in the early years of his career had apprenticed with Gary Rydstrom on the film Hercules, is currently working as supervising sound editor on the upcoming Disney Animation feature, Raya and the Last Dragon.

To work on a project where only the sound effects can be heard was a dream for the sound designer. What made this even more special for Mills is that the series highlights the power of sound design with the animation medium. “A lot of times with live action, you at least have production dialogue, some sense of the space your characters are in, you get some sounds from the movement,” says Mills. “In animation, you don’t get any of that. It takes a little extra work from us to create that sense of space. We create every little sound – from the sound of someone setting a glass down to a robot flying through the air, it all has to be placed there.”

Bess, who has been an editor at Disney Animation for over 12 years, and previously worked at Craig Murray Productions, working on trailers for films such as Disney Animation’s Tarzan, hopes viewers will take away a few key highlights from watching his series. “I hope they’ll have a renewed appreciation for the beauty of Disney Animation,” he says. “Secondly, an exposure to the incredible sound design that goes into these films. I also hope people will see some of these Zenimation episodes and go back to the films that inspired them. And lastly, we hope the series is a reminder to take a step back, take a breath, notice the world around you, and take a moment to appreciate your surroundings.”