‘Yu-Gi-Oh!’ Headed to the Middle East 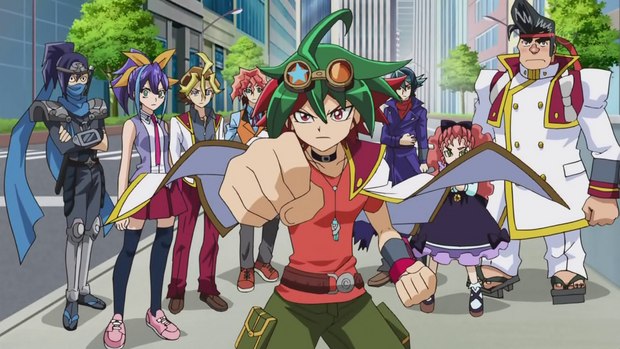 NEW YORK -- 4K Media Inc., the Konami Digital Entertainment, Inc. subsidiary that manages the licensing and marketing of the Yu-Gi-Oh! brand outside of Asia, announced it has secured a broadcasting agreement with MBC Group, specifically with MBC3. MBC3 channel will premiere the newest Yu-Gi-Oh! ARC-V series in the Middle East & North Africa (MENA) region. The agreement was announced by Kristen Gray, SVP, Operations and Business & Legal Affairs at 4K Media, and MBC3’s Management.

“We are absolutely thrilled to work with MBC in bringing the Yu-Gi-Oh! franchise back to the children of the Middle East,” commented Gray. “This is an incredible opportunity to expand the fan base for Yu-Gi-Oh! and to introduce the fun adventures the new series provides to MBC’s pan-regional Arabic speaking audience.”

MBC3 management expressed that they are looking forward to airing the well-known Yu-Gi-Oh! Duel Monsters series on both their English and Arabic feeds. The network will also debut additional series from the franchise including Yu-Gi-Oh! ZEXAL and Yu-Gi-Oh! ARC-V.

With this new agreement, MBC3 has licensed the entire library of the Yu-Gi-Oh! Duel Monsters, as well as Yu-Gi-Oh! ZEXAL and the first two seasons of the all new Yu-Gi-Oh! ARC-V.  MBC3 has Arabic-language rights around the world outside of Asia, and also has English-language rights for Middle East/North African territories.

Yu-Gi-Oh! Duel Monsters - Yugi and his best buds Joey, Tristan and Téa share a love for the newest card battling game: Duel Monsters!  Duel Monsters is a card-battling game in which players put different mystical creatures against one another in creative and strategic duels!  Packed with awesome monsters and mighty spell cards, Yugi and his friends are totally obsessed with the game.

Yu-Gi-Oh! ZEXAL - When aspiring duelist Yuma meets Astral, a mysterious visitor from another universe, it seems like destiny. Yuma needs Astral to teach him how to duel, and Astral needs Yuma to help him regain his memories. They would be dueling’s greatest tag team, except they don't get along!

Yu-Gi-Oh! ARC-V (Season 1) - Yuya Sakaki’s dream is to follow in his father’s footsteps and become the greatest “duel-tainer” in history. He just might pull it off when he suddenly discovers Pendulum Summoning, a never-before-seen technique that lets him summon many monsters at once. When countless rivals emerge to steal his spotlight, Yuya needs to gear up his game because dueling has evolved into a non-stop world of action.  In the all-new Action Duels, monsters literally come to life with advancements in holographic technology!  Duelists no longer stand by and let their monsters battle for them on the playing field - they now ride their monsters as they race through real locations to take down their opponents with their Action Cards.