Just in time for Halloween, animated comedy series from Frank Lesser, about a therapist whose patients really are monsters, launches on IMDb’s YouTube Channel and new IMDb TV streaming channel. 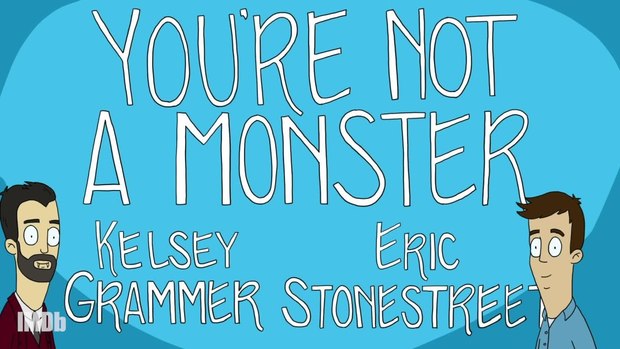 You’re Not a Monster, the new 10-episode animated comedy series from Emmy winner Frank Lesser (The Colbert Report, At Home With Amy Sedaris), is now available on IMDb's YouTube Channel, at www.imdb.com/monster, on the new free IMDb TV streaming channel, and on the IMDb iOS and Android apps.

In the new series, Max Seward (Eric Stonestreet) is a therapist whose patients really are the horrifying monsters they think they are ... because they really are horrifying monsters. But as this "para-therapist" struggles with his own demons -- and with his vampire great- grandfather who left him his practice (Kelsey Grammer) -- he learns that the only thing worse than being undead is being unloved.

Each episode is four to five minutes; Max treats a “Who’s Who” of the monster world, including Frankenstein, The Invisible Man and Medusa, all seeking his help treating their inner demons…

The series is created and written by Lesser with Lily Stuart Streiff serving as animation director; the show is produced for IMDb by Bold Soul Studios, Grammnet and Ranker.