You Might Get Bitten by New ‘Wolfwalkers’ Legendary Prologue

Anything wild must be the work of the devil, and the wolves of the forest have mysterious, magical powers to heal… and turn humans into wolves with their bite, in Tomm Moore and Ross Stewart’s beautiful new animated feature, coming soon to U.S. theatres and Apple TV+. 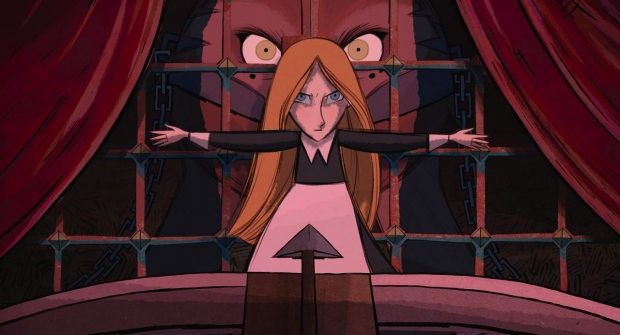 “How much do ya know about the Wolfwalkers?” Well, watch and learn, as we dig deeper into the legend in the tantalizing new “Legendary Prologue” to Tomm Moore and Ross Stewart’s eagerly awaited animated feature, Wolfwalkers.

In 1650 Kilkenny, Ireland, a young girl named Robyn Goodfellowe comes to town with her father to hunt down and destroy the last pack of wolves in the surrounding forest. In the  recently released trailer, we learn that rumors of humans transforming into wolves at night appear to be true, with tremendous consequences for our young hunting apprentice who begins to realize something magical, and dangerous, is happening to her.

The new prologue tells us a bit more, that the town fears anything “wild” is the work of the devil, and that wolves are wild, with magical healing powers, and that you must be careful lest you get bit… and turn into a wolf yourself! How do we know this to be true? Well, because a Wolfwalker told us!

The film is set for release by GKIDS in U.S. theatres November 13 and digitally around the world on Apple TV+ December 11. It is the latest in a string of uniquely designed, beautifully animated and thoroughly engaging feature films from Irish studio Cartoon Saloon, each nominated for an Academy Award; Nora Twomey’s The Breadwinner (2017), and Moore’s Song of the Sea (2014) and The Secret of Kells (2010). Though seemingly far off in the future, Twomey’s My Father’s Dragon is set to hit Netflix sometime in 2021, and like with all the studio’s features, we’ll be tapping our feet impatiently until they arrive.

And just in case you missed the trailer, here it is! And we’ve got lots of new images as well shared below.

Wolfwalkers, directed by Moore (Song of the Sea, The Secret of Kells) and Stewart (The Secret of Kells), is set in a time of superstition and magic, and tells the story of a young apprentice hunter, Robyne, who journeys to Ireland with her father to wipe out the last wolf pack. While exploring the forbidden lands outside the city walls, Robyn befriends a free-spirited girl, Mebh, a member of a mysterious tribe rumored to have the ability to transform into wolves by night. As they search for Mebh’s missing mother, Robyn uncovers a secret that draws her further into the enchanted world of the Wolfwalkers and risks turning into the very thing her father is tasked to destroy.