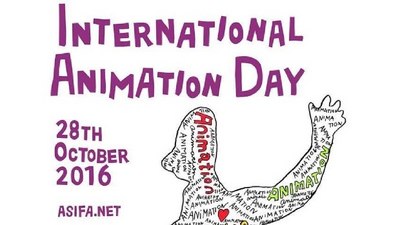 ASIFA International created International Animation Day in 2002, honoring the first public performance of Emile Reynaud’s Theatre Optique in Paris, on the 28th of October in 1892.

Since then, ASIFA coordinates and helps promote IAD celebrations all over the world: an unique event that is simultaneously celebrated in several cities over 40 countries, putting the art of animation in the limelight and approaching it to different publics and cultures.

Each year, ASIFA International calls upon a famous animator to create the IAD poster, which is then adapted for each country in order to gain a wider audience for the event.

Japanese cartoonist and independent filmmaker Yoji Kuri created 2016 IAD poster. One of the most important figures in the history of Japanese independent animation, Kuri was the unofficial leader and most prolific of the “Animation Association of Three” collective, which kick-started the renaissance of modern-styled, independently-made, adult animation in early 1960s Japan.

Although he has worked in a variety of styles and mediums, including pixilation, Kuri is known internationally for the very black comedy of his films, with the typically naïve style of his cartooning often belying the surreal, obscene and disturbing situations they depict. He is also known in Japan for his comics, a collection of which earned him the 1958 Bungeishunjuu Manga Award. Though now retired from filmmaking he continues to illustrate and to teach animation at Laputa Art Animation School.