Based in London and Berlin, respectively, new hires will bolster the studio’s growth in direct-to brand offerings, build the studio’s reputation in the UK and Europe, and develop and secure new projects. 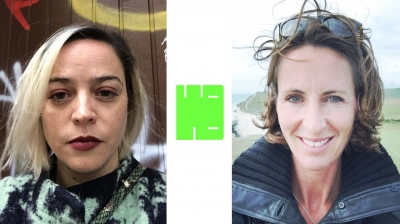 Berlin-based animation and content studio Woodblock has appointed Luiza Cruz-Flade and Crystal Campbell as Executive Producers. Cruz-Flade will be based in London, while Campbell will work from studio’s headquarters in Berlin.

With over two decades of experience in the industry, Cruz-Flade has worked as head of post-production at AMV BBDO and as a producer at The Mill. She most recently served as head of new business at Passion Animation Studios where she was responsible for securing some of the studio’s award-winning work, including Erste's viral First Christmas and JD.com’s Joy & Heron. In addition to this role, she worked as executive producer from production to delivery on Wagamama’s anime-inspired Bowl to Soul and SK-II’s striking Simone Biles VS Trolls animated film.

In her new role at Woodblock, Cruz-Flade will be focused on new business, building the studio’s reputation in the UK and across Europe, direct-to-brand offering and developing relationships with key freelance talent.

“I’m particularly excited to build the Woodblock brand in the UK - we have so many clients over here who I would love us to work with,” commented Cruz-Flade. “Our client base is now 60% direct-to-brand, and this is another area we are focusing efforts on. With our current experience of working directly with brands having been an incredibly enjoyable and collaborative process, we now wish to expand on that further.”

Inspired by her work with photogrammetry and 3D modelling at film school, Campbell initially moved between live-action and 3D before merging these two passions and pursuing a career in VFX and animation. Since then, she has worked at 1st Ave Machine, Psyop, and Roof Studio where she collaborated on several projects. She has also worked with major brands including Coca Cola, IBM, Burger King, as well as with Google - notably on its 2010 Superbowl spot Parisian Love.

Having relocated from New York, Campbell will be based at the studio’s Berlin headquarters. In her new role as head executive producer, she will lead the production team on pitching, bidding, and winning new projects. She will work closely with head of production Christian Zehetmeier and Woodblock’s management team, while setting up the studio for its next phase of growth.

“I'm really looking forward to the future here at Woodblock,” shared Campbell. “Besides having a stellar body of work, the team are just a fantastic group of people. They really care about people’s work-life balance and are truly passionate about the work that they do. We have a lot of exciting projects coming up in the new year and I'm excited to help build the Woodblock brand across the globe. Most importantly, I’m ready to head into the Metaverse with them!”

“We couldn't be more excited to have Luiza and Crystal join our Woodblock family as executive producers,” shared Woodblock MD and executive producer Ilija Brunck. “Both are A-list production talents, highly skilled and experienced in the work they do, having helped some of the best studios in our industry to grow their business and run tentpole projects.”