Stewart St. John’s superhero musical podcast, ‘The Secret Diaries of Tara Tremendous,’ to be adapted into an animated series aimed at kids aged 4 to 8. 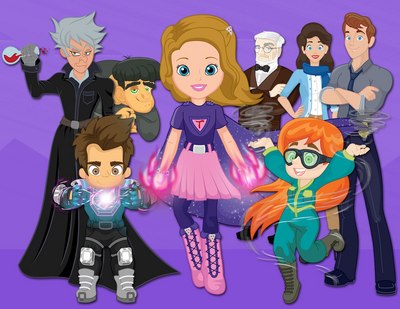 LOS ANGELES -- Wonkybot Studios is in development to turn the #1 iTunes music-driven, superhero podcast, The Secret Diaries of Tara Tremendous, into their first animated series for children ages 4 to 8 and families. This follows the success of the season one podcast, and coincides with the six-episode season two debut of the franchise on August 2nd on iTunes.

Created by Humanitas Prize and Young Artist Award-winner Stewart St John, whose extensive writing credits include over 50 episodes of Saban’s Mighty Morphin Power Rangers, ABC’s Sabrina: The Animated Series, Marvel’s The Hulk, Sony’s Heavy Gear, Hanna-Barbera’s Tom & Jerry Kids, and the Showtime Original feature Seventeen Again, the first season of The Secret Diaries of Tara Tremendous continues to be a resounding success with 50,000 downloads a day, and at one point ranking #6 overall under podcast juggernaut Serial. Consumer enthusiasm has spurred the upcoming debut of three Tara Tremendous brand extensions: the first musical album featuring a collection of all the songs from season one, The Secret Diaries of Tara Tremendous: Songs From A Superhero World, which will debut in August; an album featuring all the cues from the original score, also coming in August; and a middle grade book franchise launching in September.

“The audience’s reaction to the first season of Tara Tremendous was, and continues to be awesome, confirming we made the right decision to launch the character in a podcast in order to build awareness,” said Wonkybot CEO St John, who writes and directs each episode, composes all the original songs, co-scored the soundtrack with musical partner Plahuta, and voices the character of Dr. Epic. “Tara is a little girl with a huge heart and a lot of guts, who is spirited, determined and eventually becomes a hero who is as strong as she is sweet. Right now the world needs role models for young kids, and Tara, who has already engaged thousands of fans, is a positive influence.”

Tara Tremendous is the story of Tara Callahan, a bubbly, brave and headstrong 8-year-old girl who goes from ordinary to extraordinary overnight when she’s accidentally infused with the powers of every superhero in the world. Now this spunky, imaginative, inquisitive, sweet and adventurous little girl can summon any power she wants, but first she’ll need to learn how to use them. Stories are inspired by coming-of-age issues young kids understand, like trying to fit in with new friends, and empowering messages about family, friendship, self-image, kindness and more. Tara balances superhero expectations with her own individuality, reminding kids at home about the joys of being true to themselves.

Music, another passion for St John, is a driving force in the series. Every episode features a big musical number sung by one of the main characters, with tunes that have catchy melodies and range from pop to electronic to classic musical-style songs. A Grammy Award-voting member, St John has scored 13 albums for NY Times Bestselling authors Jerry and Esther Hicks’ children’s audiobook series Sara, published by Hay House and released through Barnes & Noble, as well as releasing several solo albums.

On the television side, Wonkybot is partnering with producing team John Rogers (creator of The Librarians, The Player and Jackie Chan Adventures) and Jenn Court of Kung Fu Monkey Productions to develop the series. St John has set the TV series at the secret Power University where Tara learns how to use her super powers, and chronicles her adventures as she learns to control her abilities, make friends and protect the secrecy of the school. The series will introduce a colorful cast of friends and frenemies, faculty members, superheroes and super villains.

Heading Wonkybot alongside St John is Todd Fisher, the company’s COO and St John’s producing partner, who also oversees the Wonkybot Studios website and content, and handles merchandise design and creation. Fisher’s past credits include Disney Online where he was in charge of the Disney Princesses digital initiative; he also worked at Warner Bros Online and Universal New Media.

Michael Plahuta is Stewart’s musical partner on the Tara Tremendous series, as both a musical arranger for Stewart’s songs and co-composer of the original scores, as well as voice-acting several characters for the series.