Created by Aaron Ehasz and Justin Richmond, the fan-favorite series is produced by Wonderstorm and animated by Vancouver-based studio Bardel Entertainment. 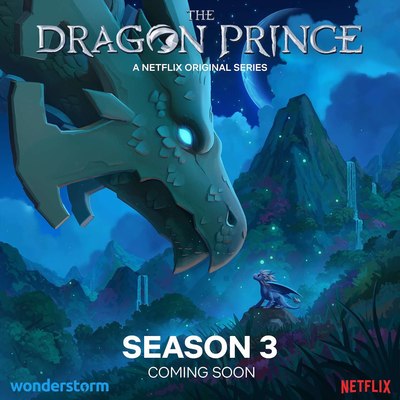 Streaming giant Netflix announced that it has renewed its animated series The Dragon Prince during the show’s panel at WonderCon 2019, unveiling key art for the forthcoming third season featuring the young titular dragon prince himself, Azymondias -- Zym for short -- and an adult dragon.

Set in a fantasy world on the continent of Xadia where humans, dragons and elves coexist, The Dragon Prince is produced by Wonderstorm and animated by Vancouver-based studio Bardel Entertainment. The series combines 3D computer animation with backgrounds that employ both CG and hand-painted 2D animation. It follows young human princes Callum (voiced by Jack DeSena) and Ezran (Sasha Rojen), who set out on a journey with the Moonshadow Elf Rayla (Paula Burrows) to return the dragon prince to his mother. However, the journey is made all the more difficult by the king’s advisor Viren (Jason Simpson) and his children, Claudia (Racquel Belmonte) and Soren (Jesse Inocalla).

While a premiere date for Season 3 is yet to be announced, fans can rest easy that more adventures from Xadia are on the way.