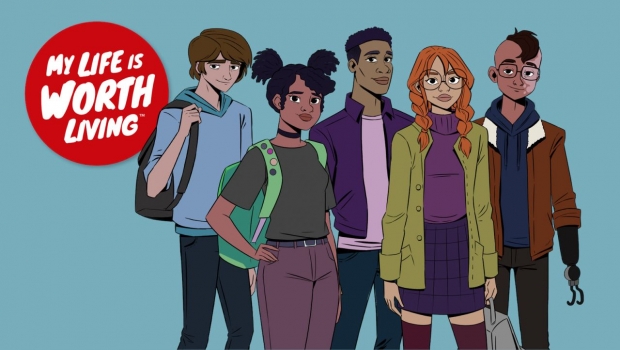 Wonder Media’s Terry Thoren (Rugrats, The Wild Thornberrys) has partnered with the Cook Center for Human Connection to address the epidemic of teen suicide, which is the second leading cause of death among people ages 10-24 and has been increasing every year since 2007. The recent pandemic has seen teen suicide rates soar even higher.

Thoren’s newest project is the suicide awareness series, My Life is Worth Living; the show will consist of 20 episodes featuring five 20-minute 2D animated stories for each character. Using relatable teen stories, My Life is Worth Living will teach suicide prevention strategies, featuring topics such as LGBTQ+ issues, substance abuse, sexual abuse, and physical injury.

The series will be available for free on the My Life is Worth Living YouTube channel (all to be released in 2021). The first episode debuted earlier this month; additional episodes to be released every Monday for four consecutive weeks.

The goals of the project include:

The series creators see animation as a tool that can eliminate preconceived ideas of race, religion, gender, or stereotypes while taking away judgement and offering the viewer a sense of "safety."

Wonder Media has created educational animations that are currently being shown in 8,200 classrooms worldwide.