Robust program largely dedicated to the work of female directors and women who specialize in stop-motion animation runs September 15-17, 2017. 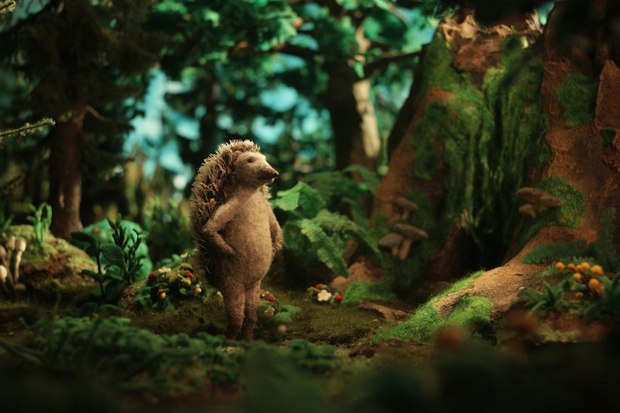 The Festival has put together an abundant program, largely dedicated to the work of female directors and women who specialize in stop motion animation. Recognizing the responsibility festival organizers have in representing the diverse implications of women in the stop-motion film animation industry from near and far, the festival aims to inspire more women to pursue careers in key creative positions in this field.

To open the festival, we the festival will host Katarzyna Gromadzka, project coordinator and executive producer at Momakin, an agency established in Poland. She will present Polish Quality, a project honoring the work of Polish artists.

Two Montreal filmmakers, Eva Cvijanović and Alexandra Lemay, will take attendees behind the scenes of their latest stop motion creations produced at the NFB. A unique opportunity to discover their respective careers and for merging artists to get inspired!

Theresa Grysczok, a director from Kassel, Germany and member of the collective Sticky Frames, will be at the festival to present a program of German short films thanks to the support of the Consulate General of the Federal Republic of Germany in Montreal. A second Carte Blanche program, in collaboration with the Stop Motion Barcelona Short Film Festival, will present films made at La Academia de Animación in Barcelona since its creation in 2013, as well as short films made by the Montreal division of Kino movement.

This year, for the very first time, the Festival will also be hosting a professional development workshop from September 12-14 with American specialist Kathi Zung and Montreal artist Laurent Canniccioni from Jako Lanterne studio. Participants will learn sculting, molding and casting techniques. In addition, Kathi Zung will present a master class conference during the weekend covering her professional career in puppet making for stop motion animation.

A variety of other activities are offered on the schedule including 87 short films competing in six international screenings, a family friendly feature film presentation, an interactive meet with the filmmakers, the specially selected Discovery program for the general public, social networking events and free stop-motion workshops. Close to 20 activities have been lined up to knock your stop motion socks off, one frame at a time.

Free activities not to be missed:

The Festival is proud to welcome Katarzyna Gromadzka, one of the four creative members of the agency MOMAKIN in Poland. The group offers, among other things, representation and networking services for visual artists involved in the creation of sets, props and puppets for cinema and, of course, for stop-motion animation projects. MOMAKIN is also behind the creation of Animarkt in Lodz, an event dedicated to popularizing emerging stop motion and puppet animation from Central and Eastern Europe.

Katarzyna Gromadzka has been wearing varioue hats since the beginning of her career. Sometimes as a coordinator, or an executive producer for film or television series, she also organizes various cultural events and coordinates cinematographic projects. She is currently the distribution manager and coordinator of international events and partnerships at MOMAKIN, including the Polish Quality project, which is being presented at various international festivals and markets in 2017. Following a visit to Mexico, Katarzyna will stop in Montreal to dazzle attendees with the expertise of Polish artists.

Alexandra Lemay works on personal and collaborative film projects as a writer, director, fabricator and animator. Her selection by the National Film Board of Canada to be part of Hothouse apprenticeship program in 2014 led to the creation of her stop motion short, All the rage. The film has been featured in numerous festivals such as the Ottawa International Animation Festival, and received a nomination for best animated short by The Gala du cinéma québécois.

Lemay takes attendees behind the scenes of her new short film Freaks of Nurture, currently in post-production at the NFB. Inspired by her own experiences and relationship with her mother, Alexandra created a comedy with a sensitive side, which deals with the theme of acceptance. Nearly twenty puppets were created for this ambitious project including adults, children, babies and animals, making for a beautiful parade of characters in this feast for the eyes.

Eva Cvijanović shows us the creation process behind her latest film co-produced by the NFB and Bonobo studio, Hedgehog’s Home. Having celebrated the premiere of the film at the Berlinale last February where she received a special mention, her film has already travelled around thirty festivals and has received awards on nearly a dozen occasions. Hedgehog’s Home also received the Young Audience Award at the Annecy International Animation Festival this summer. Don’t miss the master class conference led by animator and filmmaker Eva Cvijanović to hear more about her career and enjoy a sneak peek behind her latest creation.

Hedgehog’s Home is a needle-felted stop motion animation for audiences young and old, based on a famous children’s poem by Branko Ćopić, a writer from the former Yugoslavia. Deeply rooted in post-World War II Yugoslavia, this modern tale is entrenched in folk tradition but transcends specific cultures, eras and generations by focusing on the essence of home.

Kathi has been fabricating models and puppets in the stop motion animation industry for nineteen years. Her career began at MTV Animation in New York City, creating up to forty foam latex puppets each week for the television series, Celebrity Deathmatch. Her works in foam latex and silicon have appeared in commercials and films for clients such as: Nike, HBO, Nickelodeon, Kmart, NBC, McDonald’s, Crunch Gyms, Pampers, Laika, and Premavision – the creators of Gumby. Kathi’s masterclass conference will focus on designing and building a mold for casting puppets. She will discuss the mechanics of moldmaking and armature construction, and bring a working knowledge of the old-school puppet fabrication techniques, as well as the newer materials and streamlined methods.

Festival Stop Motion Montreal is proud to provide a friendly forum where festivalgoers can meet the artists behind the films they are watching on the big screen. With the growing number of filmmakers participating in our short film competitions visiting us each year, an official meet the filmmakers activity has been added to the Festival calendar since 2015. Local and international filmmakers discuss their different approaches and techniques in a talk led by a host, to ease along the interactive exchanges between the artists and audience members. We are expecting over 35 local and international filmmakers in attendance this year. This activity is free and open to all.

The talks will take place in English or French, depending on the preference of the interviewed artists.

The Festival has compiled 87 short films in three different competition categories. The films this year come from 26 different countries. A jury of professionals from the film animation industry will choose a winner from each category, and the public will cast their votes to elect the winner of the Audience Choice award.

The jury is composed of four members from the stop motion community. The winners will be announced Sunday evening, on the closing night of the Festival.

This year, the jury is composed of two members from the local artistic community, Dale Hayward and Hélene Dallaire, as well as two members from the international community: Ludovic Berardo and Rachelle Lambden. The winners will be revealed at the awards ceremony Sunday evening, on the closing night of the Festival.

Thanks to the support of the Consulate General of the Federal Republic of Germany in Montreal, Theresa Grysczok will join us in person to present her Carte blanche program, selected specially for the Festival. A graduate of the Kassel School of Fine Arts, Theresa is a director at the heart of the Sticky Frames collective in Kassel, Germany, which brings together young professional artists who specialize in animation. Discover a unique program in a blend of contemporary works by German artists!

In collaboration with the Stop Motion Barcelona Short Film Festival, we are pleased to present films made at La Academia de Animación in Barcelona since its creation in 2013. Discover a dozen short films without dialogue created using various stop motion techniques such as puppet animation, replacement animation, pixilation and claymation. These films were made under the supervision of Lula Gomez and Jordi Piulachs, cofounders of the academy and the Stop Motion Barcelona SFF.

View the different projects that were made during Kino’s stop motion challenge last month. The participants had fun creating short stop motion films of two minutes and less, with the only other constraint of their usual motto: Do well with nothing, do better with little, and do it now!

Discover the world of Vincent Ethier, host and co-creator of Dans ta pipe studio. Vincent and his colleague Bruno Mercure are among others the creators of the web series Camille raconte, which airs on tou.tv. This series uses various traditional animation techniques, including the drawing and animation of objects, methods favoured by the two partners. Vincent is a regular in the advertising industry and in the web series, and will talk about his career and his latest projects.

What is the Creative Club? The Creative Club was established to bring the stop motion community together in Montreal and to keep the enthusiasm for the art form going all year long. Several meeting are organized throughout the year.

Follow the Stop Motion Creative Club Facebook page for news and details of the upcoming meetings in 2017-2018, which will take place at the café-bar Kafein in downtown Montreal.

Since the very first Festival edition, a special free family program has been offered to introduce our young audience members to the exciting world of stop motion animation. In 2016, the Festival changed the name of this screening to the Discovery Program in an extended invitation to all members of the public who are curious to learn more about this unique style of animation, or to simply sit back and enjoy a carefully crafted program that is sure to please all age groups. After all, there is no age limit in discovering the wonderful world of stop motion animation! The selected films will not have any dialogue in order to accommodate all ages and languages of audience members. A diverse selection of films will be presented, from auteur films and musical films to television series episodes.

Attend a special presentation of Les nouvelles aventures de Pat et Mat/Pat & Mat’s new adventures and discover these legendary characters of Czech origin as they star in their second feature film. Popularized by the television series of the same name since 1976, Pat and Mat are revived with a new generation of budding cinema enthusiasts.

Here’s the synopsis: “Pat and Mat are two inseparable handymen and friends. Everything they do, they do with loads of determination and never give up, regardless of the consequences! Perseverant and passionate, the two companions are full of ingenious and unique ideas to overcome their obstacles. Pat and Mat always find the most surprising way to solve a problem!”

Free stop motion workshops are offered for all ages during the Festival with our hands-on animation stations. Discover the basics of frame-by-frame filmmaking under the supervision of local animators, or perfect your skills with the expertise of our on-site staff that will be happy to answer any questions and help with your creative goals. All participants will have the chance to experiment for an average of 20 minutes, or longer, depending on the volume of participants at time of arrival.

The Festival VIP pass gives you access to all of the activities offered at festival Stop Motion Montreal from September 15-17, for only $60!

On top of benefiting from discounted access to all of the Festival activities held from September 15th to September 17th, a VIP pass also gives you access to the best seats in the house as VIP pass holders receive priority entrance to the theater. That means pass holders have access to the screening rooms 15 minutes before the regular tickets holders.