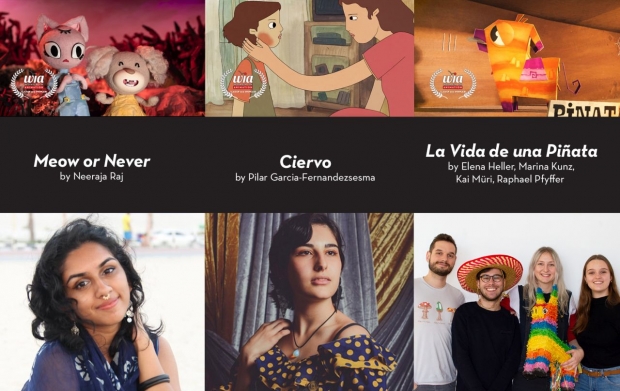 Women in Animation has revealed their Class of 2020 Best Short Film winners from the WIA Class of 2020 Showcase, announced during a live Zoom ceremony last Thursday afternoon; in revealing the award winners, WIA board members, together with several jury members, met with the recipients to talk about why they chose to honor their films. A total of 409 graduate and undergraduate student films representing 121 schools from all over the world were reviewed by the WIA Class of 2020 Showcase jury to determine the winners.

The Class of 2020 Best Short Film winners are: Ciervo, directed by Pilar Garcia-Fernandezsesma, a recent graduate of the Rhode Island School of Design. An emotionally haunting and visually beautiful experience, Ciervo tells the story of a young girl who holds violence, submission, and independence in an uneasy balance as one morphs into the other.

La Vida de una Piñata, directed by Elena Heller, Marina Kunz, Raphael Pfyffer and Kai Müri, graduates of the Lucerne University of Applied Sciences and Arts in Switzerland. A piñata experiences the same fateful day over and over again, on which it is bought by a girl and finds death at her garden party. Shocked, the piñata tries to break out of this eternal cycle. Meow or Never, directed by Neeraja Raj, a graduate of the National Film and Television School in the UK. In a madcap musical, a catstronaut travels the galaxy looking for the meaning of life - only to encounter an overeager space pup who causes trouble at every turn! The duo go on an unexpected journey together and she discovers a lot more than she expected to find.

Honorable Mentions were also awarded to:

Hsiang Chin Moe, WIA’s Chair of Education, said, "Thank you, Class of 2020 for sharing your stories with WIA, our jurors, and the industry recruiters. Your creative expressions and crafts are truly inspirational and it is our absolute honor to be invited into the worlds you created in all 409 animated short films. Congratulations to the entire Class of 2020 and congratulations to all the winners and honorable mentions. Keep creating and stay strong while navigating to a new chapter of your career! We so appreciate the time and energy put forth by the jurors, recruiters, and volunteers for making this program possible." With the WIA Class of 2020 Showcase, WIA virtually recreated the opportunities that had been missing for the talent and for the industry during the pandemic. The Showcase provided a unique platform for graduate films to be seen by animation powerhouses and recruiters, hiring managers, agents and studio executives, making important connections for promising new talent. For more info on the winning films and their filmmakers, check out the WIA website.