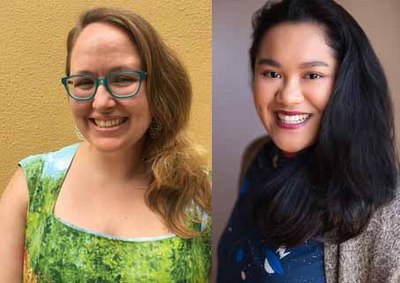 Women in Animation (WIA) announced that Heather Forlong and Esther Tejano are the recipients of the 2017 Phyllis Craig Scholarships. Established in 1997 to honor the legacy of WIA founding member Phyllis Craig, this is the first time this annual scholarship has been awarded to two student artists in a single academic year.

“I am always amazed at the wide range of interest in this scholarship,” says the head of WIA’s scholarship committee, Barb Cimity. “Applicants come from schools all over the country pursuing many interests including visual development, animation and storyboarding. Extraordinary talent is coming out of these institutions, and every year we are constantly challenged to pick just one winner. The task this year was particularly formidable, so WIA decided to grant the scholarship to two incredible women who each uniquely demonstrate a passion for animation and a promise for the future.”

Currently a sophomore at Ringling College of Art and Design who is studying computer animation with a minor in creative writing, Forlong had a path to Sarasota that was atypical. She initially completed a degree in fine art at Florida State University and began working in the school’s Department of Art Education, while also developing her prowess as an amateur skater for the Tallahassee Rollergirls. In fact, it was the supportive community of the roller derby that gave Forlong the drive and confidence to pursue her passion for animation. “Roller derby brings out the best in people, showing individuals their potential, while also being a collaborative sport. It taught me how to be myself,” says Forlong. After four years on wheels and working in academics, Forlong decided to uproot her life.

Now at age 28 and in her second year at Ringling College, winning the Phyllis Craig scholarship has given Forlong affirmation that starting a second career is doable. “To be recognized as a creative individual in the animation industry by WIA has been very validating. Mentally it is hard to make a big change in your life, so on those bad days this scholarship reminds me that I am qualified and capable.”

Tejano also found the Phyllis Craig Scholarship to be a great blessing. Emigrating with her family from the Philippines and raised in Northern California, Tejano enrolled at The Art Institute of California to pursue visual development. Tejano eventually transferred from the school’s Sunnyvale to its Hollywood campus to finish her degree in media arts and animation. “I moved to Los Angeles in 2016 with little to no connections and, for the most part, I did not feel I was good enough to be here. Winning the Phyllis Craig scholarship was a big deal to me. It made me feel special and taught me the value of patience,” said Tejano.

According to Tejano, the WIA endowment came when she needed it the most. “I used some of the funds to buy a new computer, which allowed me to produce more work as an artist and eventually land an internship at Cartoon Network. It has also allowed me to attend the CTN Animation Expo this year and to present my portfolio to studios.” Now a senior in school, Tejano will graduate in March of 2018 and looks forward to landing a job in the animation industry. “I will be the first in my family to graduate from college. My parents came here with the hope for their children to have the chance for a better education. As their eldest child, I hold myself accountable to one day support my parents for what they have sacrificed for me to pursue my passion for creativity.”

A veteran of the animation industry, Phyllis Craig started her career in 1952 at The Walt Disney Studios as a painter on Peter Pan and honed her talent in the studio’s color key department working on the classics Sleeping Beauty and 101 Dalmatians. Craig went on to work for Hanna-Barbera, Marvel and Film Roman, where she headed the color key department on Garfield and Friends, The Critic, Bobby's World and The Mask. Craig was also a fervent educational advocate, serving as president of the National Student Film Institute and managing the internship program at the Academy of Television Arts and Sciences. As a founding member of WIA, she continued to funnel that passion for empowering the next generation of creators by spearheading the organization’s internship program and connecting many students with jobs in the industry. In 1997, ASIFA-Hollywood honored Craig with the distinguished June Foray Award, a juried award given to individuals who have made a significant impact on the art and industry of animation. When she passed away, WIA created a special scholarship fund to honor Craig’s commitment to young people interested in learning the art and techniques of animation.