Enter to win tickets to summer showings of director Masaaki Yuasa’s romantic comedy about one epic night in Kyoto. 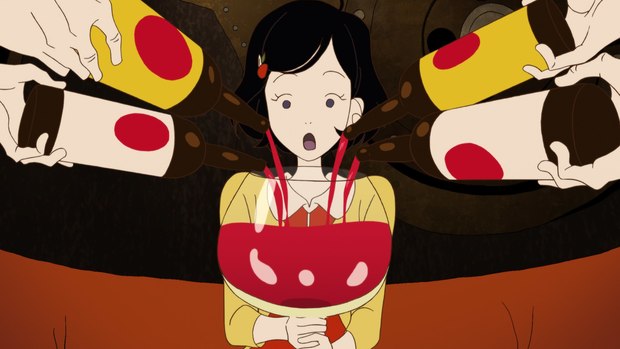 GKIDS and Fathom Events have teamed up to bring director Masaaki Yuasa’s animated comedy feature about one epic night in Kyoto, Night Is Short, Walk On Girl to theaters on August 21 & 22, and AWN has two sets of tickets and some swell merch to give away to two lucky winners!

Night is Short, Walk On Girl debuts in U.S. cinemas on Tuesday, August 21 with an encore showing on Wednesday, August 22 at 7:00 p.m. local time (both dates). The film will also receive a limited theatrical release by GKIDS starting Wednesday, August 22. A complete list of theater locations is available at www.NightIsShort.com (theaters and participants are subject to change). All showings feature the film in its original Japanese language, subtitled in English.

As a group of teens go out for a night on the town, a sophomore known only as “The Girl with Black Hair” experiences a series of surreal encounters with the local nightlife... all the while unaware of the romantic longings of Senpai, a fellow student who has been creating increasingly fantastic and contrived reasons to run into her, in an effort to win her heart.

The giveaway ends on August 13 at 11:59PM Pacific time, and is available to U.S. residents only. The winners will be selected and notified by GKIDS Films after the closing date.

Enter your chance to win using the widget below, or via this link. Not sure if you’re lucky? Grab tickets at www.FathomEvents.com or www.NightIsShort.com.