Characters from Icelandic brand Tulipop to be developed into a YouTube short-form series by DHX Media-owned multi-platform kids’ network WildBrain in collaboration with Ken Anderson of Red Kite Animation. 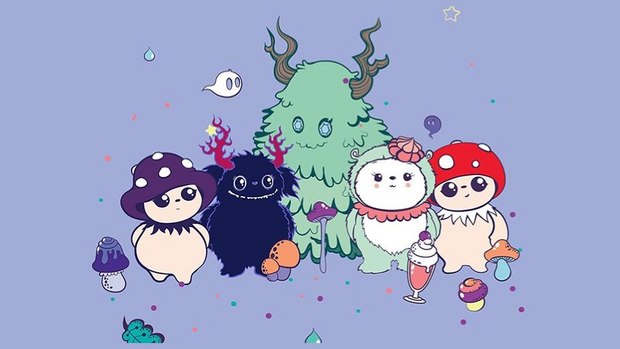 WildBrain, DHX Media’s leading multi-platform kids’ network, is developing the imaginative and idiosyncratic characters of Icelandic lifestyle brand Tulipop for into an animated series in collaboration with Ken Anderson of Red Kite Animation. Co-written by Tobi Wilson, writer on Cartoon Network’s The Amazing World of Gumball, the Tulipop series will debut this summer on the global Tulipop YouTube channel, which WildBrain will also launch and manage.

The magical world of Tulipop will come alive in a series of two-and-a-half minute episodes for children ages seven and older. WildBrain will draw on their experience launching intellectual properties on YouTube to build an audience for the new Tulipop content and to increase brand awareness as part of Tulipop’s ongoing consumer products promotion across multiple territories.

The story-driven adventures will be based on the residents of the absurd and surprising island of Tulipop, where the landscape include volcanoes, beaches, mushroom swamps and strawberry fields, and where each shifting location might not be exactly where you last left it! The island is inhabited by Tulipoppers -- quirky and colorful characters who appeal to all who are young at heart. Tulipoppers include Gloomy, the adventurous and hyperactive mushroom girl, and Fred, the furry, smelly forest creature who wants to be scary, but is too gentle instead. The Tulipoppers are meant to be flawed but loveable -- just like us.

Bringing the characters, and the uniquely Icelandic lifestyle brand they represent, to animation has been a longtime company goal according to Helga Arnadottir, Tulipop CEO, “It has always been our ambition since launching the brand in 2010 to extend the world of Tulipop into animation,” she said, “and we are delighted to be teaming up with WildBrain, Tobi and Red Kite to produce these wonderfully creative, funny and whimsical stories, which we hope will delight a whole new audience.”

Drawn from an eclectic Icelandic heritage, with ideas inspired by ancient fairytales, Tulipop is stylish, modern twist on the cuddly and gothic. The property is the creation of celebrated Icelandic illustrator Signy Kolbeinsdottir, and has been brought to market by her best friend, Helga Arnadottir. According to Tulipop, the consumer line and property fulfills their shared dream to create something unique for their own kids and for the kid in everyone.

“We’re thrilled to be launching the new Tulipop channel on the WildBrain network, and to be co-producing this exciting new animated series for YouTube. Tulipop is a fantastic world with original characters that kids are sure to love,” added WildBrain managing director John Robson.

Run from headquarters in Reykjavik and a New York office, Tulipop has grown into an award-winning design brand, comprising a book and a range of quirky and colorful character products available to a growing fan base in 14 countries. Tulipop licenses its property to manufacturers, including the American toy company Toynami.

WildBrain is an industry leader in the management and creation of preschool and children’s entertainment content on platforms such as YouTube and Dailymotion. WildBrain’s branded YouTube network features more than 20,000 videos across 350 kids’ entertainment channels, and generates approximately 30 billion minutes of watch time annually. WildBrain seeks to connect kids’ content owners with advertisers in the Advertising Video-on-Demand space.

The WildBrain network features popular third-party brands such as Strawberry Shortcake, Bob the Builder, Fireman Sam and Lazy Town, as well as much of DHX Media’s library of more than 12,500 half-hours of kids’ and family content, including Teletubbies, Caillou, Inspector Gadget, Degrassi, Yo Gabba Gabba! and others.