The famed artist and EGOT winner will voice the role of ‘The Captain’ in Peggy Holmes’ tale of the unluckiest girl in the world, the first project under the animation studio's multi-year film and TV deal with Apple TV+. 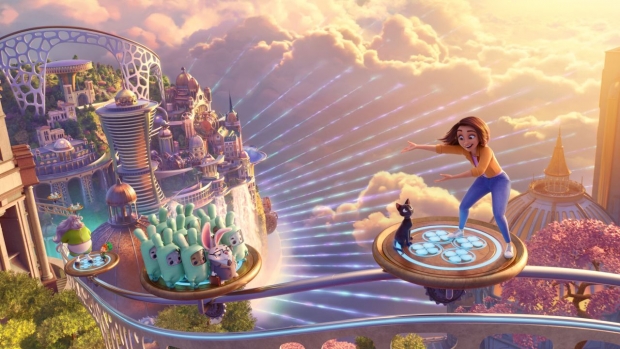 Goldberg will provide the voice for “The Captain,” the tough as nails Head of Security for the Land of Good Luck. The Captain is known for her vigilant hawk eyes and keen sense of intuition, even more so than her knowledge of Luck Security codes. She is committed to her job of keeping bad luck out and protecting the lucky pennies at all costs.  Goldberg joins previously announced cast member Jane Fonda, who will voice “The Dragon,” the exuberant CEO of Good Luck and undisputed luckiest ancient being in all the land.

Directed by Peggy Holmes (Secret of the Wings, The Pirate Fairy, The Little Mermaid: Ariel’s Beginning) and written by Kiel Murray (Cars, Cars 3), Luck centers around the unluckiest girl in the world, who after stumbling upon the never-before-seen world of good and bad luck, must join together with magical creatures to uncover a force more powerful than even luck itself. John Lasseter, David Ellison, Dana Goldberg, and David Eisenmann are producing for Skydance Animation.

Goldberg is one of an elite group of artists who have won the Grammy, the Academy Award, the Golden Globe, the Emmy and a Tony. She is also a prolific producer, entrepreneur, and is well-known around the world for her many humanitarian endeavors. Born and raised in New York City, she performed in San Diego and the Bay Area with the Blake Street Hawkeyes theatre troupe; it was there she created the characters which became The Spook Show and evolved into the hit Broadway show, Grammy Award-winning album, and HBO special that helped launch her career. Goldberg recently appeared in the adaptation of Stephen King’s best-selling novel, The Stand, and will be seen in a recurring role on Amazon’s upcoming Harlem.

The Apple / Skydance Animation partnership will kick-off with both Luck and a second animated feature, Spellbound, as well a two-season order for the new series, The Search for WondLa, that will mark Skydance Animation’s TV debut.  This past April, they also revealed Blush, their first short film. Blush, written and directed by Emmy Award-winning filmmaker Joe Mateo (Prep & Landing, Big Hero 6), follows the journey of a stranded horticulturist-astronaut, struggling to survive after he crash lands on a desolate dwarf planet. When an ethereal visitor arrives, the once-lone traveler discovers the joy in building a new life and realizes the universe has delivered astonishing salvation. Blush will have its world premiere as part of Tribeca Festival’s animated shorts program, curated by Goldberg, on Sunday, June 13.

Skydance Animation’s slate of projects joins Apple’s growing block of animation programming that includes recent Best Picture Golden Globe Award nominee Wolfwalkers, Daytime Emmy winner Snoopy in Space, and the animated musical comedy, Central Park, from Loren Bouchard, Nora Smith, and Josh Gad, recently renewed for a third season prior to its Season 2 premiere later this month. The streamer’s multiple-Emmy Award-winning lineup of original kids’ series Helpsters from Sesame Workshop; new series from Peanuts and WildBrain including The Snoopy Show; Doug Unplugs from DreamWorks Animation; Stillwater from Gaumont and Scholastic; as well as upcoming series Fraggle Rock and Harriet the Spy from The Jim Henson Company; and a newly imagined original series based on the stories and illustrations of Maurice Sendak.