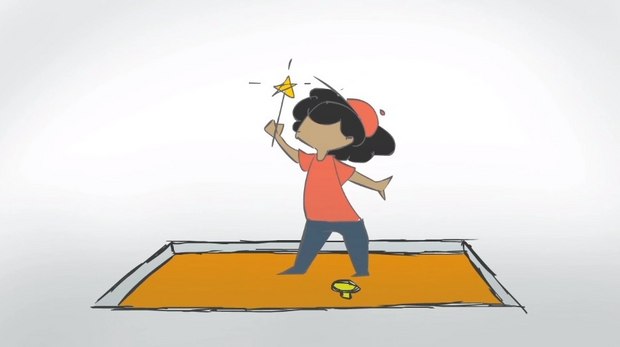 LOS ANGELES -- Nickelodeon and Get Schooled, a national non-profit co-founded by the Bill & Melinda Gates Foundation and Viacom, have named DePaul University student Dawn Adepoju as the $25,000 scholarship winner for the first-ever “What’s Your Nickfluence?” Animation Challenge. The global short film competition helps elevate and support the brightest up-and-coming animators by giving eligible participants an opportunity to submit their Nick-inspired story by creating an original short film. Adepoju’s winning short named My Nickfluence was selected for her narration on how Nickelodeon influenced her art and childhood.  Finalists were chosen by a panel of judges comprised of Nickelodeon executives and animation professionals.

“Nickelodeon’s legacy is driven by great storytelling so it was an incredibly humbling experience to see how we inspired Adepoju’s life in her heartfelt short,” said Russell Hicks, President, Content Development and Production, Nickelodeon. “We hope that this scholarship award presented from our collaboration with Get Schooled gives Adepoju the opportunity to continue telling her story.”

“The range in shorts received from the challenge reflects the next generation of animators who are diverse, passionate and incredibly talented,” said Marie Groark, Executive Director of Get Schooled. “The partnership opened up a door for these students to use their art, computer and stories to entertain and inspire.”

Adepoju enjoyed drawing at a young age, and what started as a hobby developed into a lifelong passion for creating stories through drawing, animating and writing. Growing up in a suburb of Illinois, she enjoyed watching Nickelodeon’s Dora the Explorer, The Adventures of Jimmy Neutron: Boy Genius, Avatar: The Last Airbender and The Legend of Korra. Currently, Adepoju is studying animation and hopes to pursue a career in the industry.

Additionally, five high school students were each awarded a Wacom Cintiq 13HD Creative Pen Display, along with a one-year subscription for Adobe Creative Cloud services, courtesy of the companies. Winners include: Sleepyhead by Alaine (Canada); Why My Doodles Left by Abigail (Washington); Nickfluence – Joe in Nickverse by Andi (Nebraska); Journey Through Nicktopia by Jasmine (Tennessee); and Space Cops by Casey (Texas). There was also two “People’s Choice” awards that allowed fans to vote on their favorites.

Entries were submitted by artists in two age categories, high school (13-17 years old) and college (17-24 years old) and featured original storylines in traditional and digital 2D, CG, stop-motion and experimental animation, among others.  Videos were judged on originality and creativity, incorporation of Nick’s brand and properties, and overall appeal.