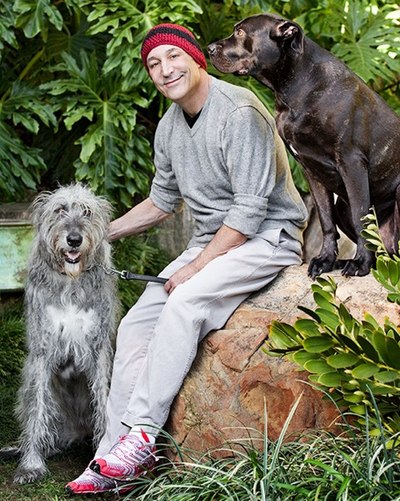 The AWC’s lifetime achievement award will be presented to honoree Simon tomorrow night, Thursday, November 21, at the AWC’s annual meeting, reception, and awards ceremony at WGAW headquarters in Los Angeles. The Simpsons Executive Producer Al Jean will present the AWC award to Simon, with WGAW President Chris Keyser slated to introduce the evening.

“Sam Simon had a distinguished career as a television writer, working on shows like Taxi, Cheers, and It's Garry Shandling's Show, but when he turned to writing animation, he helped to give birth to something which changed the landscape of television and has given him a legacy that will live forever,” said AWC Chair Craig Miller.

“Sam Simon taught me everything about animation writing, and even more about life,” said Simpsons EP/showrunner and past AWC honoree Al Jean.

Having been creatively involved with The Simpsons (Created by Matt Groening, Developed by James L. Brooks and Matt Groening and Sam Simon) since the animated series’ inception in 1989, Simon co-wrote nearly a dozen Simpsons episodes during his tenure on the show, also serving as co-showrunner and character designer. After departing the series in 1993, he retained an Executive Producer credit for nearly 500 episodes over the series’ nearly 25-year run, making it the longest-running scripted primetime TV series of all time. Named “the 20th century’s best series” by Time Magazine and having received numerous industry accolades over the years, The Simpsons earned a #11 rank on the WGA’s own 101 Best Written TV Series list announced this past summer.

Behind the camera, Simon has also directed episodes of such hit TV sitcoms as Anger Management, Friends, The Drew Carey Show, Norm, Men Behaving Badly, and The George Carlin Show. In front of the camera, Simon, a champion poker player, hosted his own poker reality series, Sam’s Game, which aired on Playboy TV, in addition to winning many tournaments and seven cash prizes at the World Series of Poker.

During his alternative career as a talent manager, Simon managed World Heavyweight Boxing Champion Lamon Brewster and was named “2004 Manager of the Year” by the World Boxing Organization.

Born on June 6, 1955, Simon grew up in Beverly Hills and Malibu, California. While studying at Stanford University, he landed his first job as a sports newspaper cartoonist at The San Francisco Chronicle and The San Francisco Examiner. After graduating from Stanford, Simon became a storyboard artist, and later a writer, at Filmation Studios, his first entry into the world of TV animation, working on such animated TV shows as The New Adventures of Mighty Mouse and Heckle & Jeckle and Fat Albert & the Cosby Kids.

Well known within the entertainment industry for his major philanthropic efforts, Simon founded the Malibu-based Sam Simon Foundation, whose mission is to “save the lives of dogs to enrich the lives of people.” The Foundation’s Assistance Dog Program adopts dogs facing death in shelters, training them to become certified assistance dogs, which are given free to the deaf and veterans with post-traumatic stress disorder. The Foundation also has a highly successful Mobile Spay/Neuter Clinic, L.A.’s largest provider of free spay and neuter services which once a week also provides low-income L.A. residents with free surgery needed for their pets. In 2011, Simon also founded The Sam Simon Foundation: Feeding Families, a mobile vegan food bank that currently feeds 400 unemployed families each day.

A longtime member of the National Board of animal rights advocate PETA, the organization thanked him by naming its Norfolk, VA headquarters the Sam Simon Center this past February. He is also involved with the international non-profit Save the Children, and donated his own ship to Captain Paul Watson’s Sea Shepherd Conservation Society, a global marine conversation organization which combats whaling and illegal fishing around the globe.