Weezer Cruising in as Special Guests on ‘The Simpsons’ 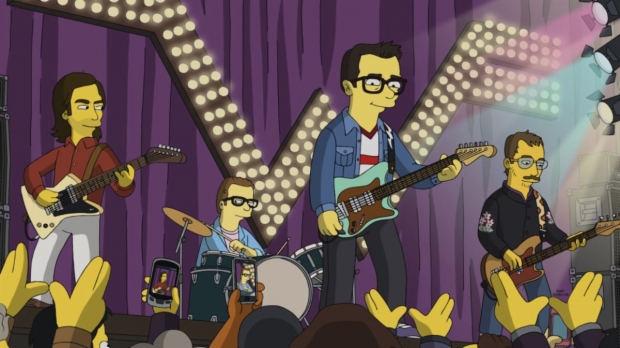 If you’re a fan of The Black Album or Pacific Daydream, then tune in Sunday to watch special guest Weezer power chord through some animated licks on The Simpsons.   In the new episode, “The Hateful Eight Year-Olds,” Weezer voices a cover band named Sailor’s Delight, the house band on a romantic cruise taken by Homer and Marge.  Some of “Sailor’s Delight’s” songs will no doubt sound familiar to you, particularly if you’re a fan of the LA rock band behind hits like “Beverly Hills” and “Island in the Sun.” But one song they’ll play will actually be the worldwide debut of their completely new track, “Blue Dream,” featured on the band’s forthcoming album, Van Weezer.

Van Weezer, the band’s fourteenth studio album, is produced by Suzy Shinn (Panic! At The Disco, Fall Out Boy). It follows the release of last year’s Weezer (The Black Album), as well as their covers album, Weezer (The Teal Album), whose streaming numbers have well surpassed 100 million. Weezer has sold 10 million albums in the U.S., and over 35 million records worldwide since their debut album’s release in 1994.  Their catalogue has included such megahits as “Buddy Holly,” “Undone (The Sweater Song),” “Say It Ain’t So,” “El Scorcho,” “Hash Pipe,” “Pork and Beans,” and more.