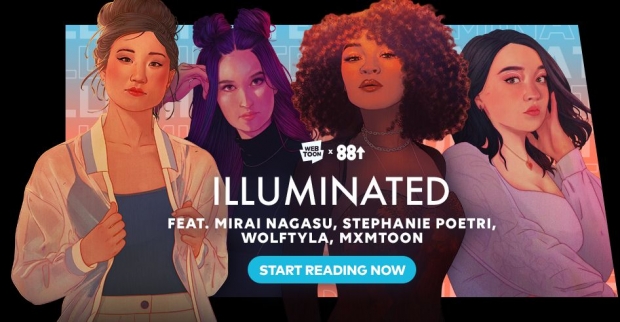 The series will feature stories adapted from interviews with talent across industries including music artists, Stephanie Poetri, Wolftyla, mxmtoon, and Olympic figure skater Mirai Nagasu; each will speak to timely, important topics such as the challenges of being a minority in the music and sports industries, struggling with identity coming from an Asian and/or biracial household, as well as the journey to overcoming Asian stereotypes that created disadvantages in their career.

The impetus for the collaboration came from the parties’ growing concern about the rise in incidents of discrimination, violence, and harassment targeting Asian Americans. The goal is to provide a positive source of inspiration in the midst of ignorance and hate, and to show Asian Americans and by extension, allied-persons of color in America, that they are not alone. The series also spotlights Advancing Justice, the largest national Asian American policy advocacy and civil rights organization, as the non-profit partner to inspire attention and action to #StopAsianHate.

"When I was a kid, there were no mixed-race Asian folks at the forefront of the pop music scene,” says mxmtoon. “So, I didn't think of music as a possibility because my story wasn't reflected in the larger space of narratives. We are in a rapidly changing space of pop culture and the fact that I'm a part of our current music scene is further proof that we're moving in the right direction."

“In light of the rise in anti-Asian violence, we wanted to create a WEBTOON series that gave Asian women the opportunity to tell us, in their own words, who they are and why the #StopAsianHate movement is important to them,” says Susan Cheng, Creative Producer at WEBTOON. “Asian people as a group have long been denied the right to make their mark on history, so I hope that those who read Illuminated will feel both comforted and empowered."

"We know from reports to the Asian Americans Advancing Justice coalition’s Stand Against Hatred website that women are disproportionately impacted by anti-Asian hate and harassment," says Marita Etcubañez, Advancing Justice's senior director of strategic initiatives. "Asian American women face the daily reality of multiple layers of marginalization, often having to confront not just racism or sexism, but the intersection of both. We are proud to collaborate with WEBTOON and 88Rising for this important effort to center the voices of Asian women in such a meaningful and creative way."

Illuminated is now available on the WEBTOON website and WEBTOON app; the series URL can be found here: https://bit.ly/3cMlSLl.