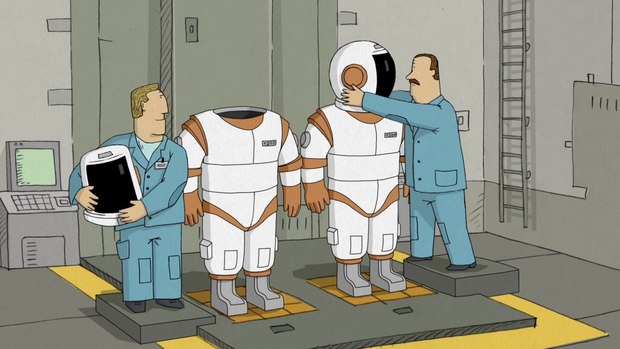 VANCOUVER -- The Spark CG Society has announced that We Can’t Live Without Cosmos (Russia), directed by Konstantin Bronzit, has won the Best Animated Short Award at the SPARK Animation Conference, Film Festival and Job Fair. The award was announced at the Spark Animation Celebration on opening night on October 21 at the Vancity Theatre in Vancouver, BC.

We Can’t Live Without Cosmos, produced by Melnitsa Animation Studio, one of the largest animation studios in Russia, tells the heartwarming story of lifelong friends training for a trip to the stars and explores the sacrifices required to pursue one’s dreams and the heartbreak of loss.

A Canadian short, Fears, directed by Nata Metlukh of Vancouver Film School, was awarded best student film. Other local student filmmakers receiving Special Mentions were Marilyn Haddad for Like There Is No Tomorrow and Nick Salmon for his short Orbit.

SPARK CG awarded its inaugural Lifetime Achievement Award to legendary animator Marv Newland for his lifelong contribution to animation both as a creative force and as a mentor for emerging talent.

Most Inventive
The Meek by Joe Brumm (Australia)

Independent Vision
Like There is No Tomorrow by Marilyn Haddad (Canada)

SPARK ANIMATION is a celebration of animation from around the world. The Conference, Film Festival and Job Fair featured the Western Canadian premiere of April and the Extraordinary World, which won the Cristal Award for Best Feature Animation at Annecy, and the Western Canadian Premiere of Mamoru Hosoda’s The Boy and the Beast. The Conference featured presentations by Sanjay Patel and his upcoming Pixar Animation short Sanjay’s Super Team and legendary Walt Disney Animation character designer Jin Kim.