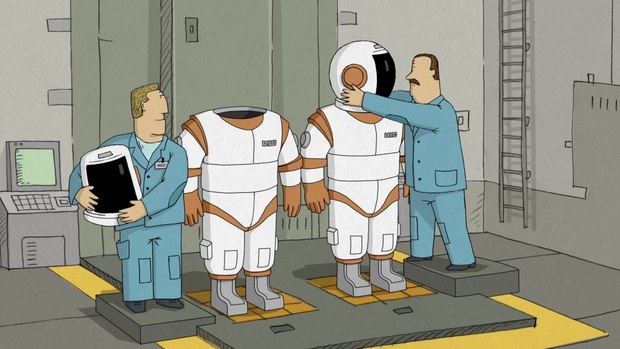 ZAGREB, CROATIA -- The 25th edition of the World Festival of Animated Film – Animafest Zagreb, which in the last six days brought more than 300 films and countless side programs not only to the cinemas, but also to the well-received open air location at Zrinjevac, closed Sunday night with an award ceremony.

Grand Prix for the best short film went to We Can’t Live Without Cosmos by Konstantin Bronzit. The jury, Chris Landreth, Jayne Pilling, Veljko Popović, Yumi Joung and Leslie Felperin, elaborated that it has “a deceptively simple and classical narrative which reveals through its mastery of purely visual storytelling, nuance and detail the evolution of a deep friendship, shattered by loss and bereavement.“

Each member of the jury gave a special mention: Veljko Popović gave it to Man on the chair by Dahee Jeong, “for the depth of thought, poetic quality and flawless execution,” Jayne Pilling to Mimma by Calvin Antoine Blandin, or to “a film with a very distinctive design, whose structure and mise-en-scene reflects and conveys powerfully the confusion and emotional maelstrom of its protagonist,” and Chris Landreth's special mention went to The Sleepwalker by Theodore Ushev, to “a film with crazy abstract beauty, perhaps channeling Miro, perhaps nodding to Maclaren, but dancing to its own entirely original beat, demonstrating how purely joyful abstract animation can be.”

Yumi Joung decided to give a special mention to Nuggets (Andreas Hykade) which “offers a simple yet vivid illustration of the theme of addiction. At first, its minimal, cute style easily leads the viewer to expect a light-hearted film. Towards the end, however, the kiwi in the dark provides a clever and powerful image of the individual in modern society.” Finally, Leslie Felperin gave a special mention to The Master (Riho Unt), with the following explanation: “A masterclass in the study of animal psychology and animal movement, as well as an outstanding work of puppet animation, is a chilling and extraordinary creation that dares to be utterly honest and completely bleak. One of the most heartbreaking films I saw in the competition, it’s one that’s stayed longest with me and haunted my dreams.”

The same jury gave two more awards: The Golden Zagreb Award for creativity and artistic achievement went to World of Tomorrow by Don Hertzfeldt. “This film is an exquisite, haunting and irrepressibly humorous exploration of memory, nostalgia and what it is to be human. With its intricate minimalism and studied spontaneity, it explores a chilling future with immeasurable warmth, making it a more than worthy recipient of this prize,” said the jury.

Zlatko Grgić Award for best first film went to Amélia and Duarte by Alice Guimarães and Mónica Santos. “On so many levels this film nailed what is important in strange innovative animation,” said the jury. “For its poetic narration, its fluid storytelling, its acting, its wonderful pixilation technique and its overall emotional punch.”

Grand Prix – feature film went to The Boy and the World by Alê Abreu. The jury for the feature film, Jung Henin, Siniša Juričić and Mihai Mitrica, awarded a film that uses innovative artwork, and combines both political and emotional feelings that took us in a colorful trip.

Special mention for feature film went to The Fake (Sang-ho Yeon), “for having so well expressed, through uncompromising direction, the dark side of the human nature and its sometimes futile beliefs.”

Grand Prix for the Croatian film went to Life with Herman H. Rott by Chintis Lundgren. Jung Henin, Siniša Juričić and Mihai Mitrica awarded “an animation that tell us the story of an impossible relationship using a very intelligent combination of music, animation and a lot of humor.”

Special mention for Croatian film went to Nikola Tesla’s Secret Laboratory by Bruno Razum, the film “that used the stop motion technique with cleverness to reinvent the story of Frankenstein.”

The jury for the student film, Vassilis Kroustalis, Branka Benčić and Max Hattler, decided that the Dušan Vukotić award for the best student film goes to Meanwhile by Stephen McNally. “The film delves with surgical precision into the lives of four lonely people, each of them clearly identified by their differentiated character design and background color palette, but at the same time all of them falling into the universal human predicament. With an excellent cinematography, editing and a well-thought of use of animation techniques, Meanwhile succeeds in conveying a single story and a point with boldness and empathy for its characters.”

Special mentions went to The Whole (William Reynish) “for its ability to turn the otherwise conventional topic of a break-up into a fresh, visually rich, multi-faceted, and narratively engaging work of animation,” and to Afternoon Class (Seo-ro Oh) because “the jury feels that the film pinpoints with narrative economy, visual flair and gusto the subject of drowsiness in the manner of a 4-minute animated essay.”

Best Commissioned Film award went to Paradise Awaits which “reinvents the well-known story of the fall from Paradise as a menagerie of superbly attractive imagery and figure transformations, subserving beautifully its original concept of an underground party for the sinners.”

The best site-specific video, according to the jury of Leila Topić and Daniel Šuljić, is Microphobia by Nikki Schuster.

Best children's film award went to the Gift by Jacoba Freyja, and the special mention went to Lune by Patrick Delage and Toma Leroux.

Finally, the public award, or Mr. M award, went to short Bear Story by Gabriel Osorio and feature Song of the Sea by Tomm Moore.