We Bare Bears follows three bear siblings: Grizzly (Eric Edelstein), Panda (Bobby Moynihan) and Ice Bear (Demetri Martin), who try to fit in to society and make friends. Whether they’re looking for food, trying to make human friends, or scheming to become internet famous, it’s obvious that being a bear in the civilized, modern world is tough. They have a lot to learn about the trendy residents that surround their humble Bay Area cave, but at least they have each other. The Bears’ favorite way to get around town is by bearstack, where Grizzly stands atop Panda who stands atop Ice Bear who walks them wherever they want to go.

In We Bare Bears: Viral Video, the bear trio open up their own food truck, try to become Internet stars by making a viral video and try to save their home when it’s threatened by a construction project. Panda develops a big crush on a woman who saves his life after he suffers a peanut allergy attack. Grizz becomes obsessed with a bear-sized burrito and takes it with him everywhere he goes. The bear brothers meet Chloe, a very smart girl who observes them for her college presentation and they also get to know Charlie, a Bigfoot who spends a weekend in their home. 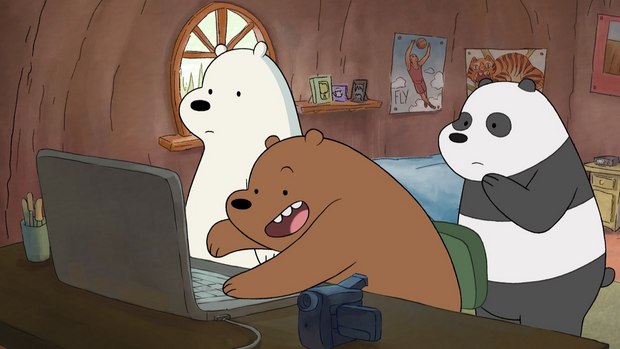