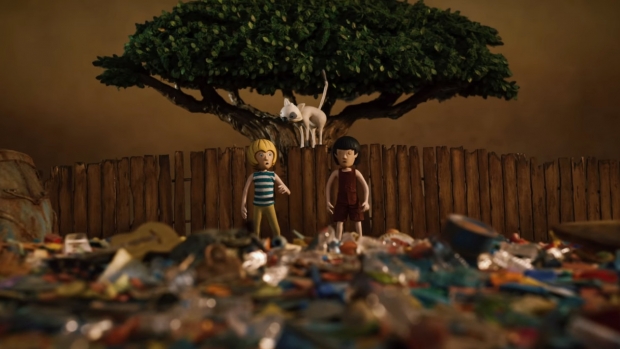 Chris Hopewell (Radiohead's Burn the Witch) and Black Dog Films have just released a stop-motion reimagining of Yusuf / Cat Stevens’ classic ecological anthem, Where Do the Children Play, from his 1970 multi-platinum hit album, Tea for the Tillerman. The music video offers a first glimpse at the artist’s forthcoming Tea for the Tillerman², being released September 18 on UMC.

50 years after it was first released, Where Do the Children Play? still depicts a chilling reality of modern man’s disregard for nature and its disastrous implications for the world’s future. Yusuf / Cat Stevens notes, “Looking at the world today and the message in this fifty-year-old song, it looks like the world never grew up.” “The song has a strong environmental message, so we wanted to make a video that mirrored that,” Hopewell added. “We decided to make the props and scenery from recycled materials wherever possible, to minimize the production impact on the environment.”

To produce the short, Hopewell did a beach clean in South Wales to gather plastic debris, which was used to make the ocean you see in the video. “Our sea scenes were made from waste plastic washed up on our shores,” he describes. “All of the sets and practically all props were made from recycled repurposed and up-cycled materials. I’d say that 90% of what you see on screen was made from recycled materials, even the rostrum the sets are built on were recycled scaffolding planks and sets painted with paints from a local charity store. All materials used were then re-purposed or recycled when the video was finished. It was a slightly longer process than usual, but fun!”

As with the whole of Tea for the Tillerman², Where Do the Children Play? sees Yusuf reunite with the key actors from the original recordings - producer Paul Samwell-Smith and Alun Davies (guitar).  They are joined by Bruce Lynch (bass), Eric Appapoulay (Guitarist), multi-instrumentalist Kwame Yeboah (percussion and keys), Jim Cregan (guitar) and Peter Vettese (keys).  The session was engineered by David Hefti. The album was recorded at Studio La Fabrique in the south of France.

According to the recording artist, although written more than half a century ago, Where Do The Children Play? stands today as a “song whose warning against global mismanagement, scientific and economic recklessness are both eerily prophetic and synchronistically in tune with the issues the world today faces.” As building developments, contracting local council budgets and the COVID-19 lockdown have forced the closure of parks, community centers and now even school playgrounds, “the lyrics remain as pertinent, thought provoking and yet, touching as the day they were written.”