WATCH: We Say Goodbye to the VW Beetle in ‘The Last Mile’ Animated Short

Johannes Leonardo and Nexus Studios’ new film takes touching look at how a young boy spends a lifetime on the road with his Beetle. 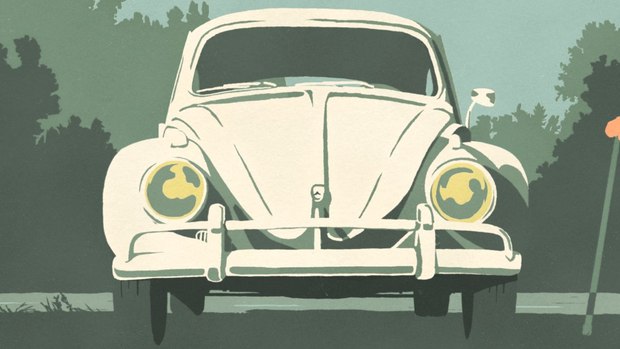 The film tells the story of a young boy growing up with his Beetle. After a lifetime on the road, we see thousands of Americans from coast to coast, from era to era, coming to say goodbye. A number of Beetle influencers and references, including Ren McCormack, Kevin Bacon, Andy Warhol, and Andy Cohen, are featured but ultimately, it is a final goodbye for VW and the brand as it prepares to usher in a new electric fleet of cars in the next decade.

The animation was produced by Nexus Studios and directed by Fx Goby, The short was created using rotoscoping; in essence, they made the film twice. According to Goby, they used this “unusual” technique “because we wanted it to feel whimsical, with the feel of an old postcard, but one which was extremely modern in design.”

“A live-action shoot captures the essence of the action, and the framing and rotoscoping is where you create the palette and simplify the visuals to have more impact,” Goby shares. “Happy accidents come from hand animated rotoscoping; every block of color is never perfectly aligned, there’s no perfect line, it’s a technique which brings warmth to the visuals. Also, the color palette of the film actually reflects true colors featured in VW models.”