WATCH: Walk on the Wild Side with Alison Snowden & David Fine’s ‘Animal Behaviour’ 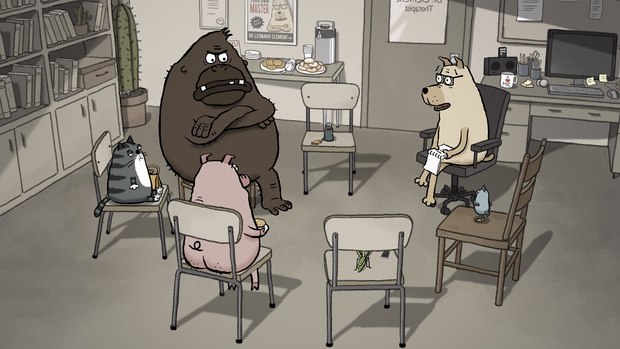 ‘Animal Behaviour’ by Alison Snowden and David Fine (2018). All images courtesy of the NFB. Available now to watch online through January 12, the comical yet moving short -- which was recently shortlisted for a nomination at the 91st Academy Awards -- presents a menagerie of animals with issues and anxieties not so different from our own. The group includes Lorraine, a leech who suffers from separation anxiety; Cheryl, a praying mantis who can’t seem to keep a man; Todd, a pig with an eating disorder; Jeffrey, a bird with guilt issues; and Linda, an obsessive-compulsive cat. But this week’s session proves to be a challenge for the group when they’re joined by a reluctant new member: Victor, an ape with anger-management issues. As Victor navigates his first session, learning about each group member’s issues and the techniques employed to manage them, he resists the therapy process, upsetting the group dynamic and ultimately giving in to his own animal nature.

Produced by Michael Fukushima at the National Film Board of Canada, Animal Behaviour had its world premiere at last year’s Annecy Festival. The short film was also selected to screen in competition at a number of other international festivals, including Edinburgh, Toronto and Vancouver, picking up awards at Anima Mundi, Cinéfest Sudbury, and the Los Angeles Animation Festival.

Watch Animal Behaviour through January 12 in the player below: