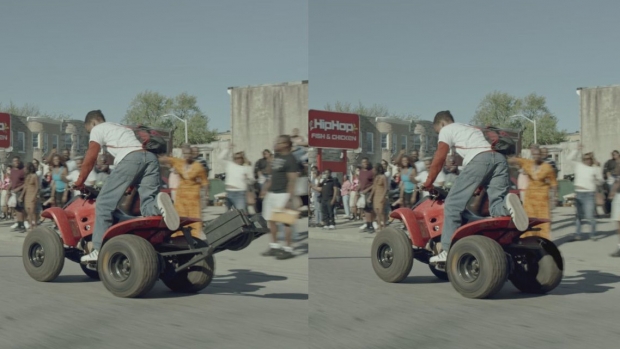 Inspired by the dirt-bike culture revealed in the documentary 12 O'Clock Boys, the film tells the story of Mouse (Jahi Di'Allo Winston), a boy who desperately wants to join an infamous clique of bikers that rules the inner-city streets of West Baltimore. It centers on the 14-year-old's emotional struggle between a straight and narrow path and the thrill and fast money of a biker's world filled with violence.

One of the most challenging visual effects was for a shot that began with the camera inverted, opening the scene with an upside-down view of a biker driving on a closed-off stretch of road. As the motorcycle passes the camera, we follow the shift in perspective as it rotates to an upright position. VFX Legion's job was to track the sweeping camera move and build out this long shot of the lone dirt-biker with the addition of dozens of photorealist computer-generated cars. Choreographed animation maneuvers the vehicles naturally through the traffic as they change lanes, accelerate, and hit the brakes.

The LA and B.C.-based company's CG library provided a cost-effective option, eliminating the need to build the automobiles digitally from scratch. Computer-generated cars were selected to match the look of the models traveling in the opposite direction on the practical footage. VFX Legion also delivered several long sequences that required “stitching” two separate shots together to create the look of one uninterrupted take. Its team stabilized camera movement and then found places to edit the footage that aligned to create the illusion of single continuous shots.

The true-to-life feel of the film hinged on the attention given to small moments and details.  A scene shot with Mouse talking to Blax (Meek Mill), a motorcycle mechanic, and another with a group of bikers was shot with Blax garbed in a clean white T-shirt. The spotless duds, clearly out of character for an ex-con living a hardscrabble life, called for VFX Legion to provide a digital solution. Adding dirt and sweat stains to the garment was a complicated process. The way fabric moves and stretches made it extremely difficult to track specks of dirt and stained patches. Artists utilized some newer tools in Nuke to track the vectors and then used the data gathered to apply the soiled and discolored areas to the shirt.

The company’s team also removed reflections, camera shadows, and stunt rigging from action-packed biking scenes along with building CG police cars and other elements, adding images to cell phone screens, and compositing shots. Most of the 100+ shots created for Charm City Kings are invisible, enabling the drama to play out in a real-world environment that defies the viewers’ eye. The artists used a mix of tools to create the range of VFX, including Andersson Technologies' Syntheyes for 3D tracking, Autodesk Maya for 3D modeling and animation, and Foundry's Nuke for compositing.

“All of our meetings were collaborative events, assuring filmmakers' that we heard their voices and understood their needs,” noted Smalley. “Efficient workflow allowed us to quickly offer up and execute digital solutions as well as provide innovative options that aligned with Angel's vision of what he wanted to see on the screen.”

“Our team is thankful for the opportunity to contribute to this remarkable film and help bring the director’s vision to life,” added Hattin. “VFX Legion’s veteran leadership brought its 40+ years of experience in the visual effect arena to the project. Our work also benefited from the cost-effectiveness and technical ingenuity that comes with working exclusively with a curated worldwide collective of experienced artists for almost a decade - a WFH approach that the pandemic has made essential, and the industry has just begun to put in place.”