Annie Award-nominated and Oscar-shortlisted short film produced as part of Pixar’s co-op program now available to watch online through January 7 as a Short of the Week. 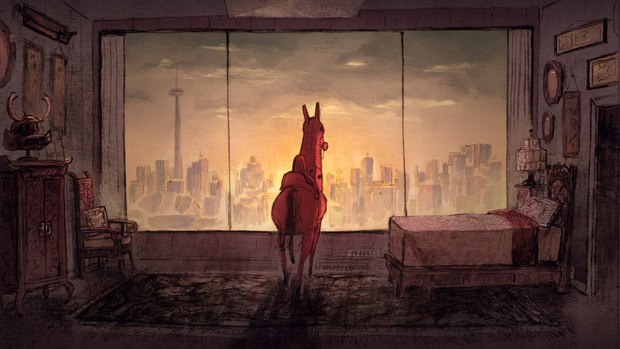 Written and directed by Trevor Jimenez, the Annie-nominated ‘Weekends’ was recently shortlisted for an Oscar nomination.

Recently shortlisted for an Oscar nomination, the 15-minute short film written and directed by Canadian-born filmmaker Trevor Jimenez has also been nominated for an Annie Award for Best Animated Short Subject.

Screening at more than 66 festivals around the world to date, Weekends has won 22 awards to date, including both the Special Jury Prize and Audience Award at the Annecy International Animation Festival, as well as top prizes at the Warsaw Film Festival, Nashville Film Festival and Edmonton Int’l Film Festival, qualifying the film for Oscar submission four-fold. The hand-painted short was also selected to screen as part of the 20th Annual Animation Show of Shows, the yearly traveling showcase dedicated to bringing hand-picked short films from around the world to U.S. theaters.

While the short film did see a limited two-week online release earlier this summer, Weekends is now once again available to watch in full through January 7 as a Short of the Week:

Working closely with production designer Chris Sasaki, Jimenez oversaw a crew of 27 animators and artists to bring the project to life. The film was produced as part of Pixar’s co-op program, which allows employees to use Pixar resources to produce independent films, but without full-fledged studio support. The program has already yielded short films such as Robert Kondo and Dice Tsutsumi’s The Dam Keeper (2014) and Andrew Coats and Lou Hamou-Lhadj’s Borrowed Time (2015), both of which received Oscar nominations.

Jimenez has worked as a story artist for more than 10 years, most notably at Pixar, Cinderbiter, Disney Feature Animation, Illumination Entertainment and Blue Sky Studios. His student film Key Lime Pie screened at numerous international festivals including Annecy, Ottawa, AFI Fest, Zagreb, and Mike Judge’s “The Animation Show vol. 4,” and won the award for best animated short at AFI Dallas 2008. He is currently employed in the story department at Pixar, where he is working on the as-yet untitled forthcoming feature from Pete Docter, while also pursuing his own creative projects.

Want more? Watch the video featurette “A Personal Story” detailing Jimenez’s journey as a filmmaker in the player below, and then click through to AWN’s in-depth interview: Within a Dream: Bringing Emotion To Trevor Jimenez’s ‘Weekends’.