Years in the making, Philip Gelatt and Morgan Galen King’s hand-rotoscoped film is set in a fantasy land ripe with magic and intrigue, where a dark force is unleashed sending mankind into an age of ruin; film stars Lucy Lawless, Patton Oswalt, and Richard Grant, and has its world premiere March 18 at SXSW. 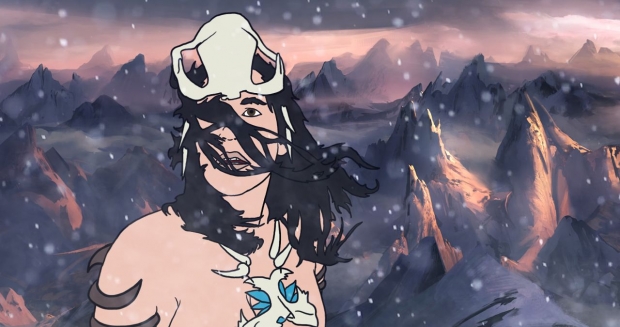 Written and directed by Gelatt and Galen King, The Spine of Night tells the story of an ambitious young man who many years ago steals forbidden knowledge from a sacred plant and, as he falls to its darker temptations, unleashes ages of suffering onto mankind. As his power grows over the years, it falls upon heroes from different eras and cultures to fight back. There are many who stand against him; among them are a daring tomb-robber, star-crossed lovers, a maniacal necromancer, winged assassins, and an undying guardian. Will humanity be saved?

Take a moment to journey back in time to a fantasy world filled with swords, witches, and much bloody mayhem.

Years in the making the film was first shot and edited in live-action before painstakingly hand-rotoscoped and animated in 2D. Produced by Gorgonaut Pictures and Yellow Veil Pictures, the film also stars Abby Savage, Larry Fessenden, and Rob McClure.