In select U.S. theaters now, ‘Snowtime!’ is directed by Jean-François Pouliot and co-director François Brisson, and had its premiere at the 2016 Sundance Film Festival. 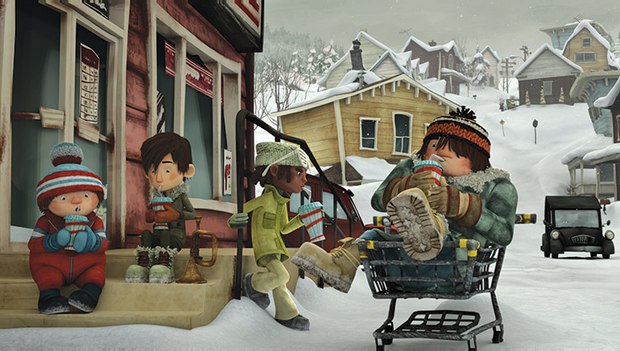 In support of the theatrical release of Snowtime!, Shout! Factory has unveiled two new clips from the animated feature that first premiered at the 2016 Sundance Film Festival:

New animated feature Snowtime! is a romp through childhood full of heart and humor. To amuse themselves during the winter school break, the kids in a small village decide to have a massive snowball fight. Luke and Sophie, both 11 years old, become the leaders of the opposing sides. Sophie and her cohorts defend an elaborate snow fort against the assault of Luke’s horde. Whichever side occupies the fort at the end of the winter break, wins. But what starts out as pure youthful fun and enthusiasm deteriorates into a more serious conflict, where children learn valuable life lessons on friendship, the importance of unity, and the emotional consequences of vicious rivalry. The film’s underlying message -- neither side wins in war -- is as relevant today as ever.

Based on the acclaimed live-action film classic La Guerre des Tuques (The Dog Who Stopped the War), Snowtime! is a captivating cinematic adventure about hope and friendship. The film explores the sometimes mercurial relations between friends during childhood, and the role that enthusiastic competition and energizing solidarity play in the lives of children.

Snowtime! is in U.S. cinemas now in the following cities: