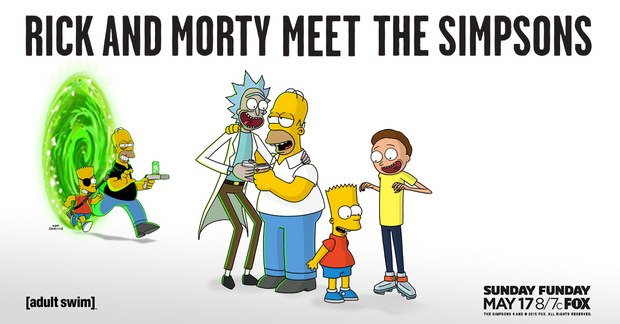 Adult Swim and FOX announced on Thursday that characters from the original animated series Rick and Morty from Dan Harmon and Justin Roiland will be making an appearance in the Season Finale of FOX’s award-winning animated hit comedy The Simpsons.

Taking over the famous Simpsons “Couch Gag,” opening credit sequence, Rick and Morty will bring their multi-dimensional insanity to the home of iconic characters Marge, Homer, Bart, Lisa, and Maggie in the season finale airing May 17.

“This couch gag plays like a full-fledged mini-episode,” said The Simpsons creator and executive producer Matt Groening. “It's going to be a real treat for fans of The Simpsons, fans of Rick and Morty, and fans of animated belching.”

“We are honored and blown away to be a part of The Simpsons,” said Rick and Morty co-creator and executive producer Justin Roiland. “If I could go back in time and tell myself that this would happen, I'd be like ‘No way, Jose!’ I simply can't believe it. I think we might all be living in some kind of massive computer simulation to be honest. Look up simulation theory. That would explain how this happened.”

The longest-running scripted show in television history, The Simpsons exploded into a cultural phenomenon in 1990 and has remained one of the most groundbreaking and innovative entertainment franchises, recognizable throughout the world. Currently airing its record-annihilating 26th season, The Simpsons has won 31 Emmy Awards, a 2015 People's Choice Award and was nominated for an Academy Award in 2012 for the theatrical short "The Longest Daycare." The Simpsons Movie was a hit feature film, the mega-attraction The Simpsons Ride at Universal Studios has received historic expansion updates with the addition of ‘Springfield’ added to the roster and the show was honored with a Star on The Hollywood Walk of Fame in 2000. It has been named the “Best Show of the 20th Century” by Time magazine, and called the "Greatest American Sitcom" by Entertainment Weekly in 2013.

The Simpsons is a Gracie Films Production in association with 20th Century Fox Television. James L. Brooks, Matt Groening, and Al Jean are the executive producers. The Gracie Films Worldwide Brand Division develops and produces the licensed content for the series. Film Roman, a Starz Company, is the animation house.

Returning this summer on Adult Swim, Rick and Morty are back with more sci-fi adventures and family squabbles. Rick Sanchez (Justin Roiland) is still living with his daughter Beth’s (Sarah Chalke) family and causing more trouble than ever. This season the rest of the family, his son-in-law Jerry (Chris Parnell), grand-daughter Summer (Spencer Grammer) and grand-son Morty (Roiland) are dragged into Rick’s intergalactic adventures, as he faces new threats and mysteries of his secret past are revealed. Can the family survive Rick’s insanity and all the chaos the universe throws at them?