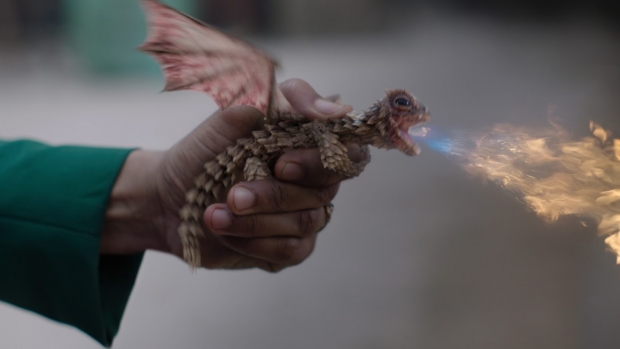 The two new characters include a dragon – a first-ever made of smoke - as large as a jumbo jet, and one small enough to fit in your pocket.

According to Realtime executive producer Jonathan Rawlinson, “This was a unique project and the ultimate animated fantasy challenge. The smaller dragon, ‘Goodboy’ could fit in the palm of your hand, while the colossal ‘Noble’ dragon was a behemoth with enough firepower to destroy a city.”

“We’d considered using real lizards,” he continued. “We thought we might combine elements like wings and fire in post-production. But the camera tests using lizards weren’t what we’d hoped. CGI, however, gave us the perfect blend of creative license and control.”

Richard Stokes, executive producer, BBC Studios, added, “I know this was a demanding brief. But the results demonstrate how well we worked together with Realtime.”

Noting that he wanted the smaller dragon to have real character and charm onscreen, Stokes explained, “We visualized a rescue puppy to help us understand the kind of emotional response we wanted Goodboy to elicit from viewers. He had broken wings and scars. His skin was modelled on an ‘armadillo lizard' with armor-like ‘sections.' This was easier to animate than traditional lizard skin, which helped with the budget.” “The huge Noble dragon was an even bigger challenge,” he continued. “We were determined that it wouldn’t look like any other dragon ever seen before. Our answer was to create the first-ever ‘smoke’ dragon - neither completely visible nor entirely opaque. The results are truly menacing. It was big and scary with the fearsome power to demolish a city; only without demolishing our CG budget!”

Initial skeletal versions of the dragons gave producers an early glimpse of how the dragons would move and react. Even though Noble dragon was made of smoke, a version was rendered with scales to help the Realtime team better understand how it would move and react. Flight tests used a simple rig draped in smoke. Finally, fire was added before committing to the fully rigged character.

Reflecting on their working remotely because of the pandemic, Rawlinson shared, “We’ve adapted the way we work, as we must. Many of the fine-tuning discussions happened remotely over video calls. It didn’t stop us innovating a dragon that worked believably in both daylight and night.”

“While Noble conveyed sheer size and jeopardy, Goodboy transitioned from cute to deadly in minute detail,” he concluded. “This was a great production to be part of. We hope viewers love the characters as much as we enjoyed creating them.”

The Watch is currently available on BBC America.