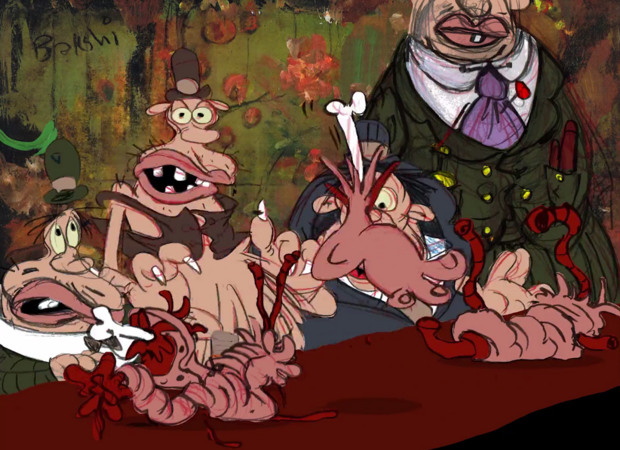 Available exclusively via Vimeo On Demand on October 29, the hand-drawn Last Days of Coney Island is billed as “a violent collage of characters, all striving to get somewhere. They can’t because they don’t know how to proceed without destroying everything, but still they try. They are all sitting in the first car on a Coney Island roller coaster going downhill fast.”

With a career spanning six decades, the iconic Bakshi has been responsible for such notable properties as Fritz the Cat, Heavy Traffic, Coonskin, Wizards, The Lord of the Rings, American Pop, Fire and Ice and Mighty Mouse: The New Adventures, to name just a few. Along with a major portion of the animation, the nearly 77-year-old Bakshi completed all of the backgrounds for Last Days of Coney Island himself.

Created, written, and directed by Bakshi, Last Days of Coney Island is produced by Edward Bakshi with music by Mark Taylor. Zac Wittstruck is the editor, and animation and backgrounds are by Ralph Bakshi. The main character voices are: Shorty (voiced by Omar Jones), Louie (Rick Singer), Molly (Tina Romanus), Louise (Esperanza Quintero) and Max (Robert Costanzo). Sound design and mixing are by Kathleen Edwards and Tor Kingdon at Hear Kitty Studios. The project is the result of a successful Kickstarter campaign, which raised over $174,000 from 1,290 backers located from around the world.

In the cheap glitter and glow of a fading Coney Island a group of characters live out their sordid, strange lives trying to get somewhere fast - any way they can. Desperately trying to love and be loved. These cops, call girls, mafia hoods, transvestites, fortune-tellers, clowns, and freaks are all intertwined, heading on a crazy roller coaster ride into a black hole they think is life.